SOF Olympiad 2022 is conducted by Science Olympiad Foundation(SOF). It is a National Level Education Organization that endeavours to promote science, mathematics, computer education, English, General Knowledge and professional courses through its various Olympiad exams. Currently, SOF is conducting seven SOF Olympiads which are NCO, IMO, NSO, IEO, ICO, ISSO and IGKO. The students from classes 1 to 12 are eligible to participate in them. Participation is only possible through school; no candidates are eligible to apply individually for SOF Olympiad.

SOF has tied up with The Institute of Company Secretaries of India to conduct ICO.

There are different exam patterns and question papers for each class. The rewards will be given to the top rank holders as per SOF norms. For the academic year 2022-23, SOF will spend over Rs. 16 Crores on awards, Scholarships, gifts & felicitations.

IGKO, ICO, and NCO are single-level exams and NSO, IMO and IEO are two-stage exams. The second stage is conducted for classes 3-12 onwards. Get all the latest updates on Science Olympiad Foundation (SOF) through this page. Also, register for FREE SMS updates on SOF and get all the latest information on your mobile, the link for the same is given below.

There are 7 SOF Olympiads that are conducted by Science Olympiad Foundation. The SOF Registration is done through the schools and the level 1 exam is also conducted at the school premises. The Olympiad is conducted on the selected dates.  We have explained all the SOF Olympiads in details. 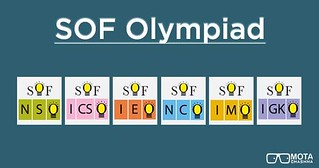 National Cyber Olympiad is one of the prestigious cyber Olympiads in Asia. NCO has been conducted successfully for the past many years by SOF. The Olympiad is conducted in partnership with TCS. It is a single level test that is conducted for class 1 to 12 students. A minimum of 5 students is required to register from an individual school. SOF NCO has questions on Logical Reasoning, Computers and Information Technology and Achievers Section.

National Science Olympiad is the utmost science Olympiad exam amidst all Olympiads and conducted in two levels. It has been successfully conducted for the past two decades. SOF NSO conducts on three dates for level 1 for the convenience of the students. The exam has questions on Science, Logical reasoning and achievers section. For Class 11 and 12 students, the questions are on Physics, Chemistry, Mathematics/Biology and Achievers section. No logical reasoning for class 11 and 12 students.

International Commerce Olympiad (ICO) is one of the newbies introduced by SOF for the students in class 11 and 12 for all streams, i.e. Science, commerce, and humanities. The Olympiad is conducted in association with  The Institute of Company Secretaries of India (ICSI), a statutory body under an Act of Parliament, under the administrative control of The Ministry of Corporate Affairs, Government of India, New Delhi.

As per the eligibility conditions of the Olympiad students from all streams are eligible for Olympiad, but 30 out of 50 questions are on Economics, Business studies, and accountancy which are more of commerce stream subjects.

ICO contains questions from Quantitative Aptitude and Reasoning, Economics, Business Studies, Accountancy, Achievers Section. The purpose of conducting ICO is to aid students in self-realizing their potential and aptitude. It is a single level SOF Olympiad.

International General Knowledge Olympiad is a single level general knowledge Olympiad that was introduced in 2017 for the first time by SOF. It is open for students studying from class 1 to 10. IGKO Olympiad has questions on General Awareness, Current Affairs, Life Skills, and Achievers Section.

SOF Olympiad 2022 application forms are only submitted to their respective schools. No candidates are allowed to submit the individual application form to SOF. A minimum of 10 students required to participate in SOF except for NCO which requires a minimum of 5 candidates to participate. The candidates need to submit the duly filled application form along with Rs 125 to their respective school. The school may also collect Rs 25 from the students for the various processes to conduct SOF Olympiad. SOF Olympiad Level 1 is conducted by the registered school as per the guidelines provided by SOF on the scheduled date.

SOF also releases Set-wise Answer Key for IEO, NSO, IMO and NCO for level one and the link to check the answer key is available on this page. The purpose of the SOF Answer Key is to self-evaluate the performance in the examination before the announcement of the result. The answer key will be released for all classes from 1 to 12.

SOF Level 2 Exam is only conducted for the IEO, NCO, and IMO Olympiads. The qualified candidates from class 3 to 12 who fall under the following categories orderly are eligible to participate in SOF Level 2 Exams:

About 55000 students from 5850 schools have been awarded for achieving top-level state ranks.

In 2016-17 sessions, 171 candidates from India were rewarded at the International Olympiad where as many as 45 lakhs students from 25 countries were participating. The first spot achiever was awarded Rs 25,000 and a gold plate to achieve academic excellence in SOF whereas the second and third winners were awarded Rs. 25,000 and Rs 10,000 & a silver and bronze plate respectively.

SOF distributes Scholarship to the students who achieve Academic Excellence in different Olympiad. Following are the scholarships under SOF:

In case of any query regarding SOF Olympiad 2022, you can write to us in the comment section below.