IEO 2nd Level result has been announced by Science Olympiad Foundation(SOF) on 6 March 2020. Students have to enter the roll number to check the SOF IEO Level 2 result. The link to check the SOF Level 2 Result is given below.

IEO Results 2019 has been declared on 3 December 2019. The IEO exam for English Olympiad was held on 10 October, 15 October & 5 November, in different schools across the country. IEO is a two-level exam conducted by Science Olympiad Foundation (SOF) every year. IEO results for all classes is declared on the official website of SOF within 45 days of the conducted exam and the participants can check IEO Result 2019.  IEO Answer Keys for the three SETS has been released by SOF and the IEO result is based on IEO Answer Keys.

A few years back the International English Olympiad (IEO) exam was conducted in single-level only but from this year, IEO will be conducted in 2 levels which are level 1 and level 2. Students of class 1 and 2 are not required to appear for the 2nd level exam. Such students are ranked based on their performance in the 1st level exam.

SOF will release the result and cutoffs to determine the qualifiers for 2nd level of exam. Check the cut off given towards the end of this page.

The International English Olympiad (IEO) is a one-of-a-kind examination, and first, in the history of English language testing in India and is conducted by SOF in collaboration with the British Council.

IEO Result is declared within 45 days of the exam date. The candidates can check their IEO Results by following the link given on this page. To check result, the candidate has to enter his/her IEO exam Roll Number and click on the submit button. Thereafter their result will automatically appear on the screen and the candidates may see and download their result. 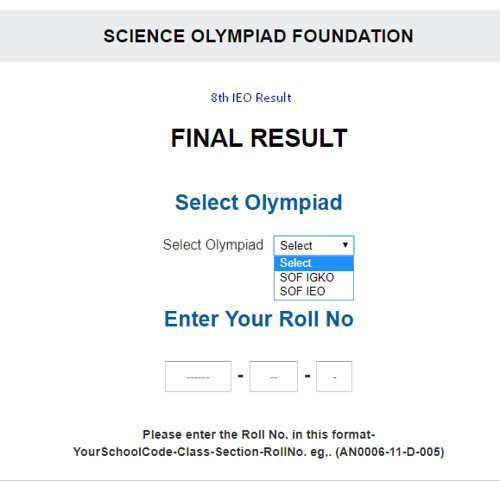 IEO Cut off marks have been released by the Science Olympiad Foundation (SOF). The cut off marks are applicable for determining qualifiers to the 2nd level of IEO Exam. The class-wise cut off marks are given below. Weightage is given to sections in the following order:

The candidates who are appeared in the 1st level exam of International English Olympiad (IEO) on 10 October, 15 October & 5 November will qualify for IEO 2nd level exam based on the following:

An Opportunity for Students who appeared in the IEO Exam

In case of any query or discussion on IEO Result 2019, you can write in the comments section below.