List of Olympiad for Indian Students is given in this article and it discusses all major National & International Olympiad organized for Indian students. The Olympiads are the platform where the brightest young minds of the world meet and take exciting intellectual challenges. This article describes the name of the top Olympiad Exam for Indian school students, the name of the conducting body, the process for selection of the students for the National & International Olympiad, reward and aim of the Olympiads. We know Olympiad is not a step to make a career, but it is a big platform to provide a stimulus to begin a career in Science, Mathematics and many other subjects. 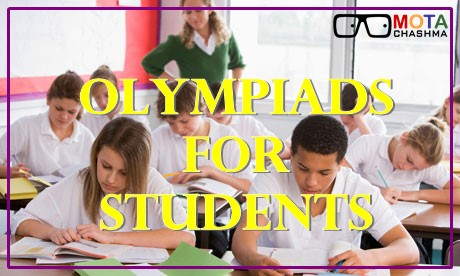 In India, Homi Bhabha Centre for Science Education (HBCSE) and the Indian Association of Physics Teachers (IAPT) are the main organizations that conduct written tests and provides training for selection in the top National and International Olympiads. The Olympiads are conducted at the three levels i.e.

National Level Olympiads are conducted within the boundaries of the country; there may be the support and involvement of the international organizations, but the important involvement of the audience is at the National level.  These Olympiads in India are conducted by various NGOs and Institutions like SOF, TERI, Unified Council, etc. In all these olympiads the registration is through school Authorities. The Olympiad given here are the reputed ones who witness participation across the country.

The Indian Association of Physics Teachers (IAPT) coordinates the Physics Olympiad, Chemistry, Astronomy and Junior Science Olympiad for India along with HBCSE. It conducts the National Level Examination in which approximately 30,000 - 40,000 students participate every year. IAPT selects the top 30 students from each olympiad for the Olympiad Training Camp then the HBCSE select the team for International Olympiad. Girl students who are willing to represent India in EGMO are required to clear all the stages of National Level Mathematical Olympiad conducted by HBCSE which are:

APMO contest is only for the students belong to the Asian country and rim of Pacific Ocean countries. Every year, APMO is held on the second Monday of March for participating countries in the North and South Americas, and on the second Tuesday of March for participating countries on the Western Pacific and in Asia. The Asia Pacific Mathematics Olympiad competition consists of solving 5 questions in four and a half hours of varying difficulty.  Students in India who are willing to participate in APMO are required to clear all the stages of National Level Mathematical Olympiad conducted by HBCSE.

The Indian Computing Olympiad is open to the all students from any board in India. The students who are enrolled in any Indian school up to class 12 during the current academic year are eligible to participate in the competition.

World Robot Olympiad is one of the top and largest robotic competitions in the world for 9 to 25-year-old age students who are studying in the field of science and technology. The talented students are selected by the World Robot Olympiad (WRO) which is an International Robotic Olympiad. WRO India is a team-based challenge, and the participating teams are required to create, build and design a robot model that can behave and look like a human athlete.

Science Olympiad Foundation (SOF) is a non-profit organization which works to promote science, mathematics, introductory computer education and English language skills among young & talented students in India. The students desirous to participate in the program organized by Science Olympiad Foundation can register themselves only through their Schools.  There are six SOF Olympiads annually in India which is following:

Silver Zone is an educational and, non-profitable and non-government organisation situated in Delhi, India. The silver zone organisation has been working from the last 12 years and has been organising talent search examination on national & International level subjects. The students who want to participate in Silver Zone Olympiad programs can register themselves only through their Schools. Silver Zone conducts the following Olympiad:

National Finance Olympiad (NFO) organised by International by International Institute of Financial Market and sponsored by Economic Times. The Olympiad aims to make young students familiar with money management art which is a basic requirement for everybody in the world. The NFO is only for the students who are studying in class 8 to 12. The students can participate in the competition individually and also through their schools. The winner students will receive the cash prize worth Rs 100000. Finance Olympiad

The Green Olympiad is written examination conducted by The Energy and Resources Institute (TERI) and supported by the Central Board of School Examination (CBSE) every year which is based on the subject Environment. More than 2 lakh school students participate in the Olympiad. The student studying in SBSE affiliated schools in class 4 to 10 are only eligible to participate in the competition. Ministry of Environment and Forest awards Certificates of Participation to all students who participated in the contest and winners from every state gets Cash prize. Green Olympiad

In a case of any query or discussion on Olympiad for Indian Students, you can write in the comments section below.