Remind Me Later
x
AAKASH ANTHE 2022 Register FREE
Home > News > NEET 2018: There Will Be Common Question Paper For All Languages

NEET 2018: There will be Common Question Paper for All Languages

There was an allegation that the question paper in some regional languages was tougher than the English one. After this allegation, CBSE was suggested by the court that questions should be common to all languages. 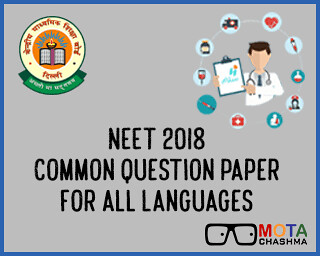 NEET Question Papers will be same for All States

NEET question paper would be provided to the candidates in the language they have chosen in the application form. Furthermore, the question paper in native language will also contain the questions in the English language to elude any confusion. Hence the candidates appearing this year in NEET exam will not have to face such problems faced by the forebears. This move by the Supreme Court aims to avoid the come around of the previous controversy of NEET Question Papers.

NEET is a common entrance examination which conducted by CBSE for admission in MBBS & BDS course. NEET was introduced in the year 2016 to avoid multiple exams that would cost a lot of money and time. This year NEET examination is likely to be conducted on 6 May 2018.

In case of any query related to the news, you can write to us in the comment section below