23rd ICAR AIEEA has been cancelled for UG, PG and PhD exam that was conducted on 22 and 23 June 2018.  This was the first year that exam was conducted in the Computer-based mode for AIEEA UG, PG and PhD course.  On 4 July a petition was filed in the Madras high court regarding the irregularity in the conduct of ICAR Exam. Madras high court had said that it will release the judgement on 11 July and the repercussion is that the ICAR Exam has been cancelled. Even though the petition was filed for the UG course the exam has been cancelled for AIEEA UG, PG and JRF.

The Notification states "It has been decided with the approval of Competent Authority in the Indian Council of Agriculture Research to cancel the ICAR’s 23rd online All India Entrance Exam (CBT) for admission to UG, PG, Ph.D courses held on 22 and 23 June 2018 due to administrative reasons. The examination will be conducted again for which notification will be issued separately in due course." 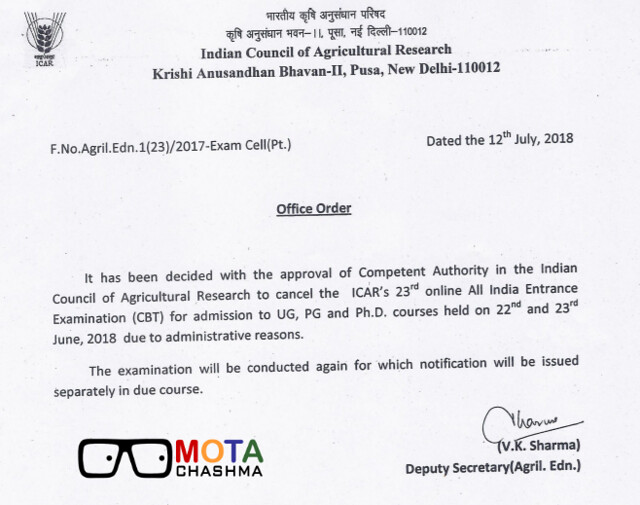 Reasons for cancellation of ICAR AIEEA 2018

The Thiruthangal Nadar College, Selavayal test centre reported problems. Murugavel the father of the girl (who appeared in the exam) had filed the petition due to Various Problems that were reported in the conduct of the ICAR AIEEA like

The Madras High Court had issued a notice to Indian Council of Agriculture Research (ICAR) and the judgement was due on 11 July.  A notification dated 12 July was released by ICAR on 13 July which stated that ICAR Exam was cancelled and will be re-conducted. The petition filed due to technical glitches in the exam and other similar complaints received by ICAR from other students have led to the cancellation of ICAR Exam.

The notification clearly states that the exam will be re-conducted. No exam date has been announced as on now. We expect that ICAR Exam 2018 will be conducted in the month of July as the admission process has to be closed soon. No clarification is there whether ICAR Application Form 2018 will be re-opened. The ICAR result was expected to be announced soon but now a complete delay has been caused in the whole admission process.

ICAR is a national level Agriculture Entrance Exam that is conducted for admission to 15% All India Seats in UG courses, 25% seats in PG courses and 100% seats in the Deemed Universities.

What are students expected to do now

In case of any query please write to us in the comments section below and also you can register here for Free SMS Updates on ICAR Exam.