ICAR Result 2018 Latest News: ICAR PG re Exam will be conducted for students of Kerala who appeared or were not able to appear for the ICAR re-exam on 18 August. ICAR has issued the notification regarding the ICAR PG Re-Examination on 16 September 2018. ICAR PG Result will be announced by the end of September 2018 and counselling will be held in October for allotment of seats.

ICAR Counselling Registration has started on 10 September Monday for UG and PhD admission. On 7 September Kerala HC has passed the judgement and ICAR PG Exam is cancelled for Kerala students only that was conducted on 19 August 2018. A re-exam would be conducted for ICAR PG Exam only for the students of Kerala. ICAR PG Result for Non-Kerala Students should also be declared soon.

Earlier High Court of Kerala has stayed the publication of ICAR Result 2018 for the Re-exam that was held on 18 and 19 August 2018.  The reason for the stay on the ICAR result 2018 is that due to floods in Kerala a lot of students have not been able to appear in the ICAR Exam.

The students can find date wise ICAR Result latest news on this page. This year ICAR Exam, as well as ICAR result, was delayed time and again due to various reasons like cheating, mismanagement of Computer-based exam and then finally the Kerala Floods that hampered the ICAR Re Exam.

This year the exam was first conducted in computer-based mode and then the Pen and Paper based mode. Earlier as per the orders of Madras HC, ICAR conducted a re-exam for  23rd ICAR AIEEA entrance examination for UG, PG and PhD admissions. ICAR exam was earlier cancelled because of the irregularities in the ICAR computer-based exam. 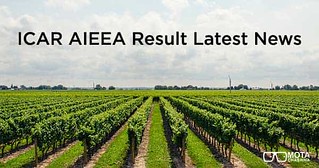 ICAR PG Re Exam will be held on 16 September 2018. The notice for Re-exam has been issued by ICAR. 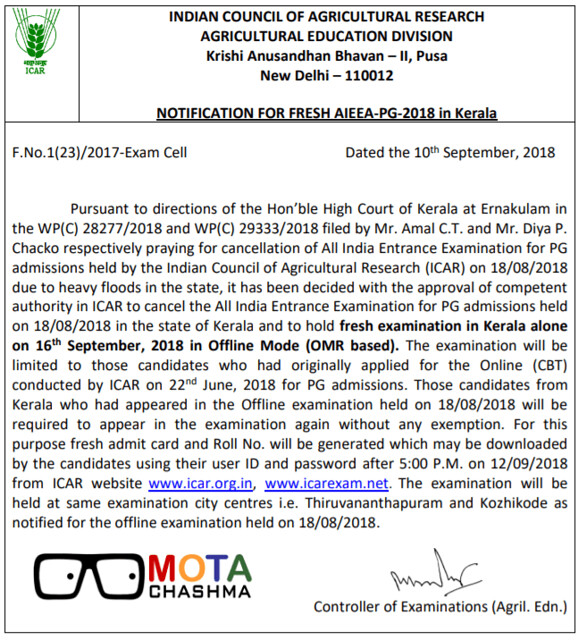 Kerala high court announced that ICAR PG Exam has been cancelled and a re-exam will be conducted soon not only for Kerala students but at the All India Level. The ICAR result for UG and SRF has been announced. Motachashma team is working dedicatedly to provide latest updates on ICAR Exam news.

The Latest news on 7 September on ICAR result is that the ICAR PG Exam has been cancelled only for Kerala students. Earlier the judgement stated that ICAR PG Exam is cancelled at all India Level.

Kerala High Court has removed the stay on ICAR UG Result and ICAR PHD result. The ICAR result stay is still there on the ICAR PG Result.  The next hearing for ICAR PG result is scheduled to be announced on 7 September at 10:15 a.m. and the students can stay tuned with us for that. The ICAR Result for UG and PhD is expected to be announced soon.

The ICAR Result 2018 may be announced today for ICAR UG, PG, JRF. The students should stay tuned to us for the release of result. There is no development on Kerala High Court stay or any announcement by ICAR regarding the same. The last date to update the academic details in  ICAR Application form was 26 August, and we expect ICAR result to be announced soon.

Two student Amal C T and Adarsh C K could not attend the exam, and hence they have filed a petition in the court and asked to put a stay on the ICAR Result. The stay order was passed by Justice Muhammed Mustaque of Kerala High Court. The students also appealed that their test centre for the exam was changed at the last moment and was shifted to Kochi. The timing of the exam was 10 a.m. to 1 p.m., and the review at Kochi was held from 1:30 to 4:30 p.m. with the same set of question paper. Around 40% of the students were able to attend the exam and other could not as they were in the relief camp or have not received the information about the change in the ICAR Test centre at the last moment.

ICAR has opened the window to raise an objection on the question paper as well, and we have mentioned about the steps to apply for ICAR Question paper objection.

Steps to raise Objections to the ICAR AIEEA 2018 Question Paper

All the exam authorities follow a very transparent system to evaluate the exam. Before ICAR Result is announced, the candidates are given the facility to point out any error in the ICAR question paper. If no error is reported ICAR will go forward with releasing the ICAR AIEEA result, but if the objection is raised by the candidates, the exam authority will look into the matter and only after that is resolved the ICAR result 2018 will be released. We are expecting the ICAR result to be declared in this month but the Kerala High Court issue may delay the ICAR Result once again.

From past many ICAR has been giving the facility to raise the objection to the ICAR Question Paper. Earlier when the exam was conducted in pen and paper-based mode, the candidates could also ask for a copy of the OMR sheet. The candidates will also be given a chance to raise objections on the ICAR answer key. These all things are done so that ICAR result is announced in a fair manner.

ICAR Counselling for both UG and PG exams will start after the result is declared. ICAR will also release the ICAR colleges and seat matrix before the counselling starts.

As per the hearing of Madras HC on 11 July, the authority ICAR has decided to re-conduct ICAR UG, ICAR AIEEA PG and ICAR JRF/SRF exam.

July 4 Update on ICAR Result - Madras HC issues notice to ICAR to conduct re-exam. As per the petition filed by B. Murugavel, it was asked to re-conduct the ICAR entrance examination. The matter was later adjourned till 11 July 2018. For more information on the news click on the link provided above.

July 3 Update on ICAR Result - ICAR AIEEA result has been postponed. Earlier, the result was scheduled to be released in the last week of June. However, as per the latest notification, previous schedule date of declaration of result has been withdrawn due to administrative reasons fresh date will be intimated in due course. 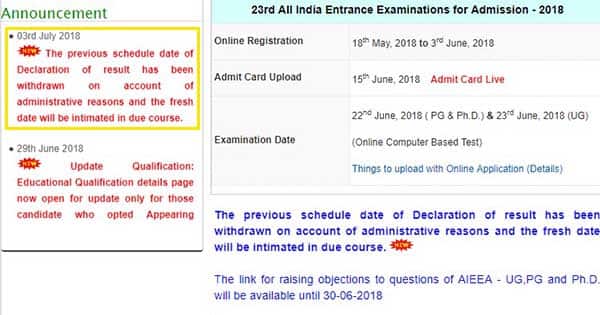 June 29 Update on ICAR Result - ICAR Educational Qualification details page is now open for update It is open only for those candidates who opted "Appearing" Candidate in Qualifying Exam as Yes. The last date to update qualifying exam information is 3 July 2018