Delhi University Sports Quota/ ECA trial Schedule List 2018 has been announced by Delhi University. DU Sports trials at identified college will start from 22 June and end on 29 June 2018 wheras the preliminary trials of ECA will begin from 14 June and will end of 21 June 2018. Delhi University grants admission to the students on Sport and Extra Curricular Activites (ECA). Hence, the students who are good in sports and ECA can apply for the admission in DU. Each college of DU reserves maximum 5 per cent seats for Sports/ECA quota in all undergraduate courses. Although, the individual college has the authority to decide the actual number of seats offered under the quota. The admission in DU via sports quota is done in two ways i.e. either through direct admission or through sports trials. Likewise last year, the most number of applications in sport category has been received from football as compared to other sports. From the session year 2018-19, the colleges would get sportspersons according to the college teams' requirements. The said proposal made by the DU's sports council has been reportedly approved by the council to the admission committee. The first sports admission list will be released on 9 July 2018. This page had the information about Delhi University Sports Quota/ ECA.

The candidates who appeared in the prelims ECA trials can check the result which has been declared by the Delhi University. The ECA prelims result is declared on 22 June 2018. The candidates are suggested to follow the link given below. The selected candidates will now appear in the preliminary rounds. The guidelines for the same is also given on the website of DU 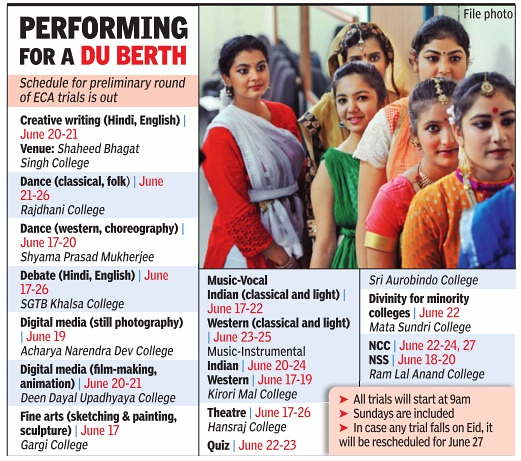 The candidates seeking admission to the Delhi University for the admission in UG courses can go to the section of ECA while filling the application form. There are several categories offered in the Extra Curricular Activities (ECA) Quota and the candidates can select the sub-categories accordingly. The candidates applying through the ECA quota need to select the Yes for the section “Applying for ECA Quota." 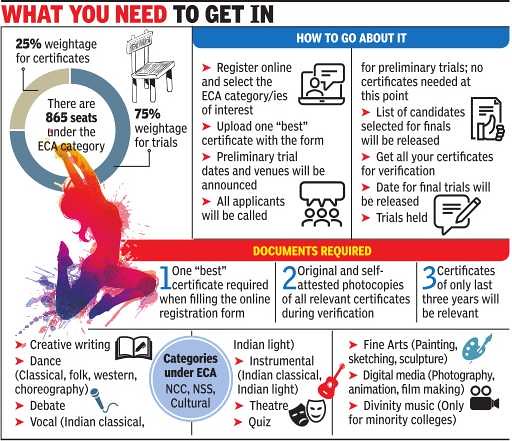 The sport quota admissions will be based on 60% weightage to sports trials and 40% of certificates. Now there will be no qualifying "Fitness Test" for sports trials. The sports council of Delhi University has decided to have a sport specific test within the centralised sports trials instead of fitness test.

DU Sports Quota Admission schedule has been released by the Delhi University. DU Sports trials at identified college started from 22 June and end on 29 June 2018. The complete schedule for the DU Sports Trials is given below. 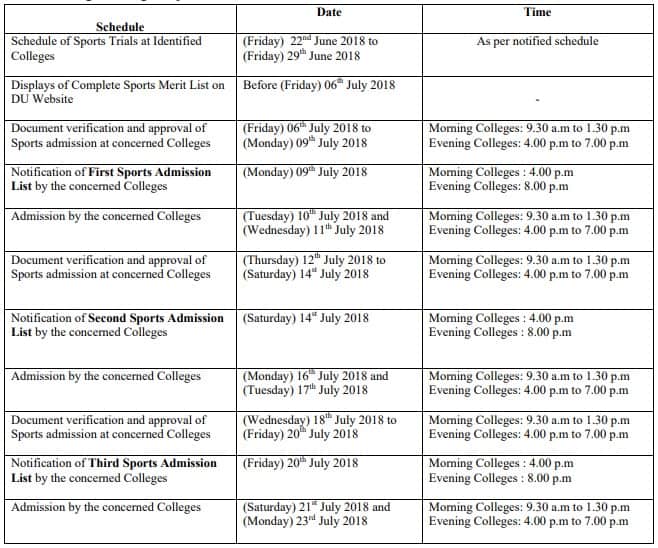 Sportsperson who have represented the country in the following Competition are eligible for Direct Admission in Delhi University. All candidates have to upload the self-attested copy of the “highest sports certificate“.

Admission on the basis of Sports Trials

Candidates are also offered admission in Sports Quota on the basis of fitness test followed by sports trials.  The dates for preliminary and final trials will be notified on the College Website and Notice Board before the last date of Registration. The trial-based candidates have to upload their sports certificate for admission. Only those certificates that will be issued between 1 April 2014 and 31 March 2017 will be valid.

No Fitness Test before the Sports Trial by the University

Now there will be no qualifying "fitness test" for sports trials. Delhi University Sports Council has decided, instead of "fitness test" there will be a sport-specific test within the centralised sports trials. This sport-specific test will be conducted by the Committee constituted by Delhi University Sports Council and it will also video graphed.

DU Sports Trial by the Colleges

The student has to apply individually to each college for admission through Sports/ ECA Quota. Application forms are available in the college administration office itself. The candidate needs to go to the office himself/herself for the application forms. The candidate has to submit the self-attested copy of the Sports certificates along with the DU sports quota application form. The sports quota admission will be based on 60% weightage to sports trials and 40% of certificates.

According to the new admission policy, sports trials will include fundamental skills, overall playing ability, and game sport specific fitness. The Delhi University Sports Council (DUSC) will identify and allocate colleges to conduct specific trials. The candidates have to score at least 50% (38 out of 75) marks to be eligible in the final selected list.

Result: The list of finally selected candidates containing, marks of the Sports Trials and Sports Certificates along with course/subject allotted shall be displayed before admitting on the College Website and Notice Board for three days to take cognizance of the grievances if any.

The Sportsperson who are selected for DU Admission through Sports Quota has to submit an Undertaking on Judicial Stamp paper of Rs. 100  at the time of admission stating that he/ she will play for the College and University, all the years, during his/her undergraduate course of Study.

Sports Trial Marks will be divided into 3 parts 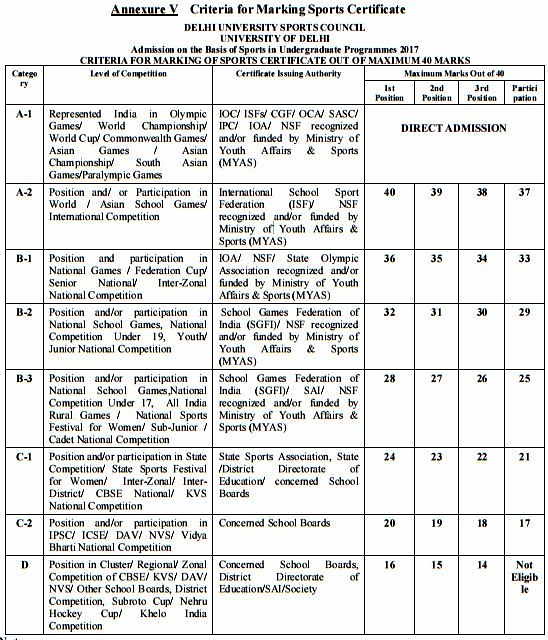 The Colleges will separately notify the number of seats under ECA Quota (supernumerary). The dates for preliminary and final trials will be notified on College Website and Notice Board. The candidates are advised to keep a check on College Website and Notice Board. ECA trials will be held at two levels: Preliminary Trials and Final Trials. The candidate must have secured at least 50% marks in final trials (38 out of 75) to be eligible, while the preliminary round is qualifying.

Guidelines for admission to various undergraduate courses on the basis of Extra Curricular Activities (ECA):

Number of Applications for Sports and ECA Quota - Previous Year

In case, of any query related to DU Sports Quota/ ECA Admission 2018, you can write to us in the comment section below.