CBSE Class 10th Maths Retest will not be Conducted

CBSE Class 10th Maths retest will not be conducted, the HRD ministry’s secretary Anil Swarup announced this news in a tweet on 2 April 2018. After all the hearings and confusion, Central Board of Secondary Education (CBSE) has finally decided not to conduct the retest of Class 10th Maths Paper even in the states of Delhi NCR and Haryana. This decision has been taken after the evaluation of the impact of leaked CBSE Class 10 Maths paper and Keeping in mind the interest of students, Swarup tweeted.

Around 1.7 million students who appeared in the exam on 28 March 2018 will be relieved by this decision.

In light of the exam paper being leaked, earlier CBSE announced the retest for Class 10 Maths and Class 12 Economics exam. For this, they have been facing the anger of the students. The image of handwritten maths question paper was circulated on social media on 26 March 2018.

CBSE has officially announced retest date for Class 12 Economics, the re-exam will be conducted on 25 April. Earlier, Class 10 re-examination was expected to be conducted in the month of July. But this tweet by HRD ministry’s secretary Anil Swarup cleared all the confusion. 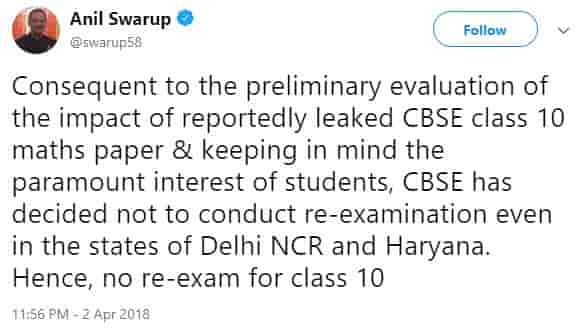