CLAT Cut off 2018 marks will be released soon and the candidates will be able to check university-wise CLAT 2018 cutoff here. Since CLAT 2018 has been conducted and the candidates rated exam easy as compared to last two years, the CLAT expected cut off will be around 130 as per the experts report. Admission into 19 NLUs and several law schools will be based on CLAT Cut off 2018. However, each NLU will release their cut off for admission into undergraduates and postgraduates law degree programs. CLAT 2018 (Common Law Admission Test) will be conducted by National University of Advanced Legal Studies, Kochi in Kerala. CLAT 2018 Cut off will be available on this page once released. Test takers must note that CLAT cut off 2018 will vary according to the category of candidates. Only the candidates obtaining the minimum CLAT cut off marks will be eligible to take part in the counselling rounds. The candidates can read on CLAT cut off 2018, Expected Cut off, previous year ranks, analysis, etc. from this article. Scroll down to read in details about CLAT cutoff 2018.

CLAT Cut off 2018 will be released separately by each university for admission into 5-years integrated program and 1-year LLM program shortly after the declaration of CLAT Result 2018. The candidates will be able to see the categories-wise and university-wise CLAT Cut off here. It will be updated once released by the NLUs. However, the previous year CLAT Cut off Rank and Marks are given below for the purpose of a rough idea about CLAT Cut off by different universities. As per latest information, Law aspirants will be able to take admission based on their respective cut off into 19 NLUs across India in as many as 2255 seats in undergraduates and postgraduate programmes. 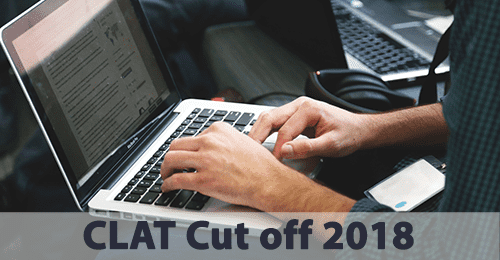 The table below shows the CLAT cut-off for each National Law University. The highest cut-off for CLAT is of NLSIU Bangalore. This is the cut-off marks for the UG Course.

Observing the table given above, we can see CLAT cut off has been increased over the year. NLSIU Bangalore topped the list of highest cut off each year. However, there are various factors on which CLAT Cut off rely. The candidates can check the following main factors which affect CLAT Cut off.

CLAT 2018 has been conducted and around 60,000 candidates appeared in the same. As per CLAT experts, the paper was easy as compared to last 2 years. The CLAT cut off is expected to increase by 130 for the first three colleges (NLSIU, NALSAR and WBNUJS). Candidates scoring around 158-160 marks have higher chances to get admission into top NLUs. However, the university-wise cut off will be released later, officially.

After the declaration of CLAT Result 2018, and merit list, the candidates will be invited to their respective university based on their rank and cut off of each NLU for the counselling process. Shortlisted candidates have to appear as the prescribed schedule in CLAT Counselling which will be held in 3 rounds. The candidate needs to pay Rs. 50000 for the counselling process. To read more on CLAT Counselling 2018, click on the link given below.

CLAT 2018 is an all India law entrance exam conducted on rotation by 19 National Law Universities (NLUs) in India for admissions to their undergraduate and postgraduate law degree programmes. The Common Law Admission Test (CLAT) is the most coveted law entrance exam for admissions to as many as 2255 seats in five-year integrated law programmes and postgraduate programmes. CLAT was conducted for the first time in the year 2008.

In case of any query regarding CLAT Cut off 2018, you can write to us in the comment section below.