Latest Update: The college wise allotment list through the Second Mop Up Counselling and vacant seat list is released on 18 November 2017. The direct links to check these lists are available on this page below. Candidates can scroll the page to check the link.

For Mop Up Counselling

UP CAT Counselling will be conducted as per the schedule has given above in the tabular form, The following step has to be done for UP CPAT Counselling Process. Candidates are required to follow the given below instructions and process guidelines.

The candidates qualified for the UP CPAT exam have to first register for choice filling through online mode. The candidates have to register by paying Rs 1000 (non-refundable counselling fee) from 13 to 15 October 2017. The following candidates are eligible for registration:

The candidates who have successfully registered themselves for UP CPAT counselling have to now fill their choices according to their preferences. The candidates can give preference as many as they want. The choice can be arranged any number of times till final submission. The choice filling process will be done from 13 to 16 October 2017.

STEP 5: Verification and Seat Confirmation (Round 1)

College Allotment (Round 2), Counselling letter download (Round 2), Second Verification and Seat Confirmation (Round 2) and Allotment Letter Downloading will be the next step (step 6 to 9) for UP CPAT Counselling. All the process mentioned above will be done as per the schedule is given in the table on this page.

STEP 10: Mop up counselling Round

On completion of the 2nd round of UP CPAT Counselling, if seats remain vacant, will be filled on the basis of mop-up counselling which is scheduled to be held on 27 to 31 October 2017.

The candidates who have been allotted the colleges will have to report to their respective colleges along with their original documents and allotment letter up to 9 November 2017.

UP CPAT Mop up counselling

On completion of the 2nd round of UP CPAT Counselling, if seats remain vacant, will be filled on the basis of mop-up counselling which is scheduled to be held on 27 to 31 October 2017. The candidates participating in the mop-up counselling round will have to pay Rs. 1000 (non-refundable) through credit card or debit card. The candidates also have to carry all the original documents and a bank draft of Rs 50000 as seat confirmation fee in form of a demand draft made in favor of "Finance Officer" Lucknow University. The following candidates are eligible to participate in Mop-up counselling:

UP CPAT Mop up counselling will be conducted as per the schedule is given below in the table: 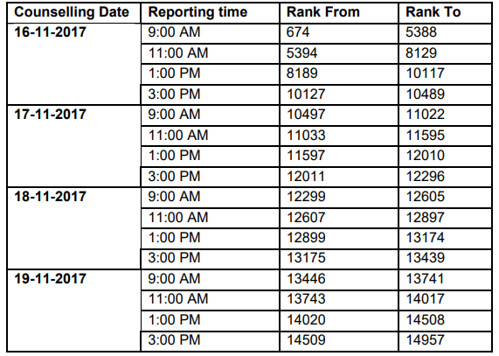 In a case of any query related to UP CPAT Counselling, you can write us in the comment section below.