AIPVT Admit Card 2017 will be available for download on the official website of VCI from the second week of April 2017, onwards. (Read the notification). AIPVT Admit card will not be dispatched through Post and it has to be downloaded from the official website of the Veterinary Council of India.  AIPVT 2017 Admit Card will be available on the VCI website only to those eligible candidates who have submitted their duly filled AIPVT 2017 Application Form ONLINE along with application fee before the due date.

Latest Update: AIPVT 2017 will not be conducted this year. Get detailed news and VCI Notification - AIPVT 2017 Exam Cancelled: Admission based on NEET.

Once downloaded keep AIPVT Admit Card safe for future use.

VCI will publish the list of registered applicants who have paid the Application fees with their roll numbers on the AIPVT website. If the candidate has failed to pay the fees by the due date then his/her name will not appear in the list.

In case the candidate has paid the application fees and still his/her name does not appear in the Applicant's list then they should contact the AIPVT Helpline before the commencement of the AIPVT 2017 Exam, with the following documents for considering his/her candidature for the examination:

On the day of AIPVT Examination

On the day of examination the candidate should carry the following things:

The candidates are not allowed to take with them the Log Tables, Calculator, Electronic watches, Mobile Phones etc.

Guidelines for the candidates appearing in AIPVT 2017

AIPVT is a Pen and Paper Based Test which will be conducted in the second week of May 2017. 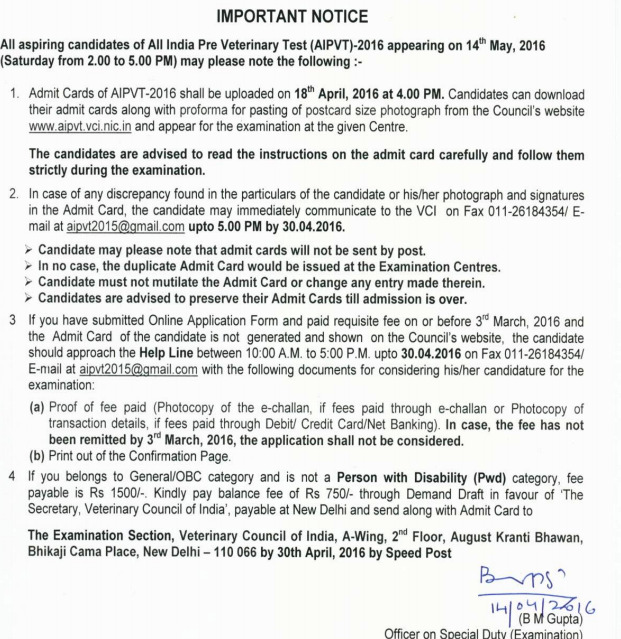 For any other details related to AIPVT Admit Card 2017, you can write us in the comment section below.