NEET 2017: Notification and Changes - According to the latest news, the NEET now has now eliminated the upper age limitation and introduced few major changes to the exam. The union health ministry has also approved the decision of unlimited tries to take the examination for 15% All India Quota as well as 85% State government quota in all government, private, central medical colleges and universities in India. But it is not officially declared yet, the final decision for the upper age limitation and the unlimited attempts for the exam is yet to be processed by the Medical Council of India/Dental Council of India and the final changes can be seen in NEET 2017 Official Brochure.

In a letter written to CBSE Joint Secretary, the Ministry of Health and Family Welfare carried a permission on the information bulletin of NEET UG 2017. The letter written by Amit Biswas, under secretary of India stated: “As on date, the minimum age of 17 years as on 31 December 2017 with no upper age limit and no limit on attempts have also been approved which is applicable on All India Quota seats" 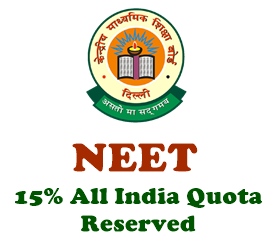 All India Quota Reservation for NEET

Through this news, we are going to provide you information about the decision which has been taken MCI/DCI. The readers are advised to read the decisions carefully:

The decision mentioned above is approved by the Hon’ble Ministers of Health & Family Welfare under the Association of Medical Councils of India/Dental Council of India.