IJSO 2017 Winners: Gold Medal Bagged by Mumbaikar Subarno Nath Roy, who is among the 6 winners from India participated in the IJSO 2017 held in the Netherlands. Recently, International Junior Science Olympiad (IJSO) was held which is the last stage of Science Olympiads conducted at different stages by the Indian Association of Physics Teachers (IAPT). The result has now been announced and it feels glad to hear that an Indian boy had bagged the title of the winner with Gold Medal.

What is IJSO Exam?

IJSO is an abbreviated form of International Junior Science Olympiad (IJSO). It is an annual competition conducted by an individual and with the team also. IJSO is the last stage of the Science Junior Science Olympiad conducted by IAPT. The IJSO exam is held to encourage the interest of students in Science and its pursuit of excellence. It also helps the students to analyse their strong and weak points and deep understanding of scientific facts.

The Junior Science Olympiad program is conducted in 5 stages;

Indian Association of Physics Teachers (IAPT) has announced the result for the IJSO this year. Subarno Nath Roy has won the Gold medal in the competition followed by three other members. Moreover, two students from India won the Silver medal in the IJSO.

Subarno Nath Roy professed that his father is as an inspiration for participating and winning this competition. And when asked about what he wants to say to other students, he just said - "I would suggest students to love learning new things and expand their horizon of knowledge." 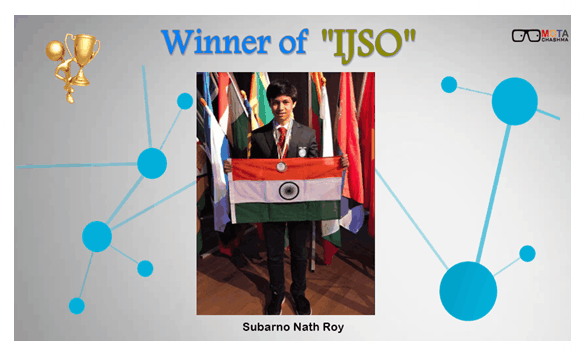 Conversation with Subarno Nath Roy on winning the Gold
Medal

The team Motachashma had a Question and Answer Round with the winner and we tried to know about his inspiration, his preparing tips and other things too. The insight of the conversation is given below:

How do you get to know about IJSO?

How often you participate in such competitions?

What are your future plans for higher studies?

What do you aspire to become in life?

IJSO is a Multi-Stage Exam, How was your journey?

Representing India is a matter of pride, what was your reaction when you got selected for IJSO?

What is your message for other students in India for participating in such competitions?

How has Mota Chashma helped you in achieving your goals?

Other Olympiads and Scholarships for Candidates