IITs wary of plan to add 1000 seats and also got a proposal of 14% increment in the admission quota for women by the Joint Admission Board (JAB). This proposal is difficult to be accepted by some IIT campuses that are new and lack infrastructures. Some IIT campuses are not sure that they will be able to accommodate more students in their campuses. They need to sure that they have enough space to accommodate all students before increasing the intake capacity. Sudhir Jain, director of IIT-Gandhinagar said that they don’t want to overburden their classrooms and hostel rooms. 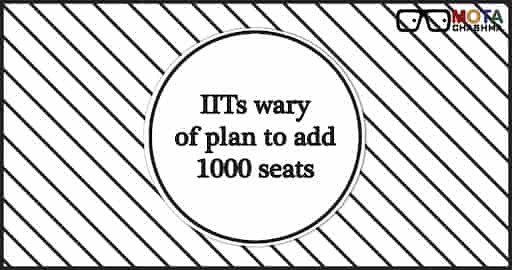 In 2017, a new undergraduate course had started by IIT-Bombay (IIT-B) and they also increased their intake capacity by 30 seats. But for the upcoming academic year, the institute has no such plans. Institute has space for 8,000 students but the actual number of students is 10,400. The institute has a huge campus with 16 hostel buildings and another two buildings are under construction which will be ready by mid-2019. The new hostel buildings will accommodate 1,100 rooms once they complete. Devang Khakhar, Director of IIT-B has also said that another similar hostel building should come up in another two years. Institute might start a new course rather increasing the intake capacity of existing courses said Director of IIT-B, although there is no confirmation as yet. No intake capacity will be increased in IIT-Goa and IIT-Dharwad (centres are mentored by IIT-B) as well.

According to IIT-Madras officials, there are possibilities that the construction process for new hostel building will be started by March this year in order to accommodate more students. Jagadeesh Kumar, Dean Academics, IIT-Madras said, they cannot increase their intake capacity without making sufficient space for more students.

In case of any query related to “IIT Seats”, you can write to us in the comment section below: