IIT Graduates get up to 1.4 Crores in Campus Placements

IIT Graduates get up to 1.4 Crores in Campus Placements. This is believed to be the highest offer given by Microsoft for this recruitment, inclusive of bonuses and stock options, for profiles in their Redmond headquarters. The firm has picked about a dozen students from across campuses. Four to five candidates were also shortlisted at IIT Bombay from the computer science and engineering department. Four candidates were also picked at IIT Madras and IIT Kanpur each.

Microsoft also hired students from IIT Delhi, IIT Guwahati and IIT Roorkee for US profiles. The placement drive became successful at IIT Delhi on its very first day with a computer science student bagging the Crore plus offer from Microsoft, but the official data is not released for this yet. Students are happy that Microsoft (US) has been showing a keen interest in hiring students this year. All the students hired by Microsoft India have been offered around Rs. 34 Lakh per annum.

Apart from Microsoft, there were other recruiting companies on the campus. There were many prominent companies like Uber International, Texas Instruments, Goldman Sachs,  ITC and Deutsche Bank etc. Some of the highest domestic packages have been offered by Tower Research, World Quant, and Blackstone.

Tower Research and World- Quant are said to have offered a package of around Rs 45 lakh. The total registered students for placement this year are around 1,700 at the Powai campus. Five offers were made by Texas Instruments at IIT Bombay. Eight offers came from Goldman Sachs, BCG made seven offers and Booz made five offers. 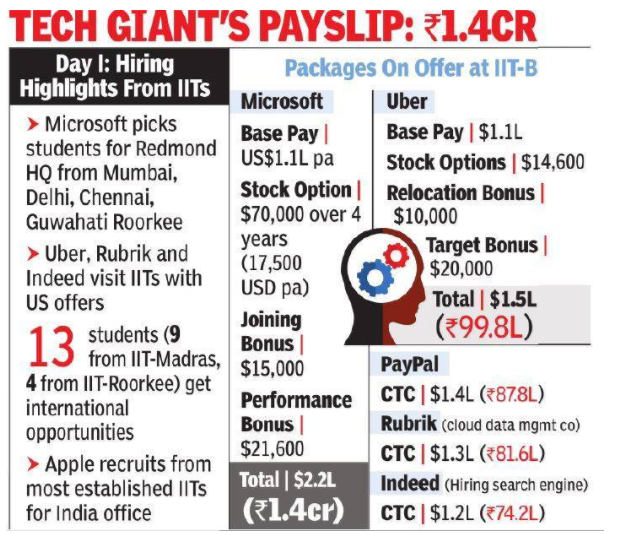 IIT Graduates get up to 1.4 Crores in Campus Placements - Highlights of the news!

What Officials have to say about this

The institute is expecting over 225 companies to participate in the first phase. For a total 93 offers were made at IIT Madras in the first slot including nine international offers. Apart from Microsoft and Uber, Rubrik and Indeed made the global offers.

"There is not much difference salary package-wise if you compare this year's placement with that of last year. But we have more offers. And more international offers," said Manu Santhanam, advisor, (training and placement) at IIT-Madras.

For any queries regarding the news, you can write to us in the comment section below.