IDC IIT Bombay M.Des Admission 2018 will be done on the basis of the CEED Scores for 2018 - 20 session. However, the candidates will also have to further appear for an admission test and interview. The Master in Designing course offered at IIT Bombay is provided by Industrial Design Centre (IDC) which is also known as the design school of India. IIT Bombay is famous institute which offers undergraduate as well as Postgraduate programs in various streams. The shortlisted applicants will be called at the IDC Kolkata for the further selection process. The last date to apply for the IDC IIT Bombay M. Des Admission 2018 is 20 March 2018.

Get Details on B.Design at IIT Bombay

There is no age limit for admission in IIT Bombay IDC M.Des program. However, applicants must be a graduate and must have completed their Class 10 and 12 followed by their graduation.

Qualifying Exam: Candidates will get admission in M. Design on the basis of CEED scores. Therefore, the candidate must be qualified through Common Entrance Examination for Design (CEED) to get admission in IT Bombay IDC M.Des Program.

Candidates are free to apply to any number of streams. The candidates need to submit separate application forms for each stream along with the applicable fee.

All the candidates who have qualified CEED and carry a valid score can apply for admission to M.Design program for various streams mentioned above in Industrial Design Centre (IDC), IIT Bombay. Candidates are advised to check the eligibility criteria before applying for the program. The link to apply for the IDC M.Des Application Form is given below. The last date to fill the IDC, IIT Bombay is 20 March 2018.

The candidates should keep at least two copies of Admission form along with them for future reference. The fee is to be paid by Demand Draft drawn on any nationalised bank (preferably State Bank of India/ Canara Bank) in favour of “Registrar, IIT Bombay”, payable at Mumbai branch. The admission form should be submitted to the following address:

The candidates can find the details of category wise fee classification which is providing details of Fees, Deposits and Hostel rent is given below. 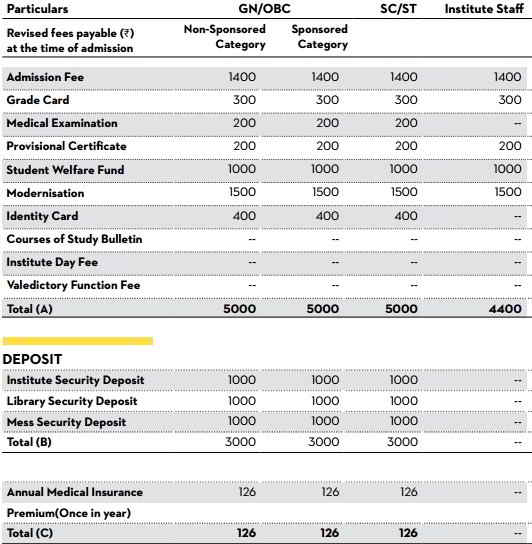 The IIT Bombay M.Des admission will be done on the basis of CEED. The CEED exam was conducted on 20 January 2018 and the result for the same will be declared on 5 March 2018. CEED Merit list will be prepared on the basis of the scores of the candidate. The complete details about the CEED Result can be obtained by following the link below. 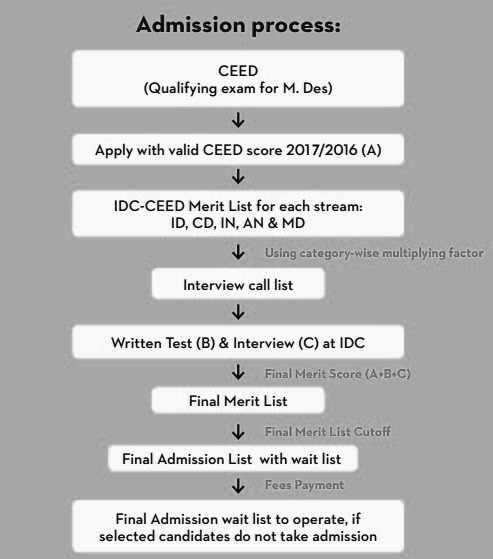 STEP 1: Applicants those who have qualified the CEED Exam would be eligible for the admission to IIT Bombay IDC M.Des Admission 2018

STEP 3: Students selected in the merit list on basis of CEED Exam (also known as IDC CEED Merit List) would be selected for the Interview and the Written test and Interview.

STEP 4: The category wise and the course wise merit list of students will be prepared and those students whose name appears in the merit list(also known as Interview Call list) would be called for the interview and written test.

STEP 5: Interview Call list is decided on the basis of category-wise seats available in each stream and by using a multiplying factor for each category.

STEP 7: Candidates with the final score that is less than the Final merit list cut off for their respective category will not be considered for admission even if a seat is available in that category.

The candidates will be selected on the basis of CEED scores. The CEED exam pattern is given below. The Examination will consist of two parts, PART A and PART B. Both the parts will be conducted on the same day.