DU Sports Quota Admission 2017- Delhi University (DU) has announced to scrap fitness test for admission under sports quota into various undergraduate programs this year. However, conducting the centralised sports trials will continue and there will also be a discipline-specific fitness test for 10% weightage. The sports trials weightage for the final selection for sports quota admission has been also increased by the DU authority. 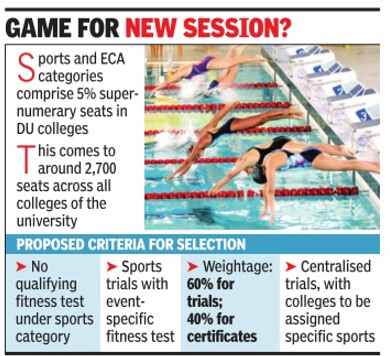 The University of Delhi has proposed some of the changes mention above for admission for the 2017-18 academic sessions. These proposals are still in the process the process to be approved by the standing committee. The proposals are likely to be adopted in the final guidelines from this academic year.

"We have now created a well-defined method for the weightage to be given to the certificates. When a candidate applies online, there will be a drop down menu from where one can choose the tournaments for which one has been certified. In case the tournaments/events are not listed, it means there won't be any marks for that certificate," said the admission committee member in DU.

In the case of any query related to this News, you can write us in the comment section below.