Through Entrance Test Score, the candidates can get the admission into following affiliated college of HP University. Duration of BAMS/BHMS Course is 5½ years including one-year compulsory rotatory internship.

Official HPU BAMS /BHMS Result has been declared and can be checked in the link given below.

Candidate should have completed or should complete the age of 17 years and must not have completed 25 years of age on December 31 of the year of the concerned competitive examination.

At the time of applying for the Entrance Test, candidates should have passed/appeared in any one of the qualifying examination:

However, the candidates need to fill the separate Himachal University Application Form for the counselling which would be held by the Himachal Pradesh University. The application form will be available soon. The candidates are advised to keep themselves updated on the website of motachashma.

The candidates have two options to make the payment of the application fee through online mode or offline mode. The two of the methods are well described below.

The candidates should know that an admit card is a very important document to be carried at the examination hall. Hence, the candidates are suggested to take the print out of the admit card and keep it safe for future use.

The annual fee structure provided below is for the Rajiv Gandhi Govt. Post Graduate Ayurvedic College and Solan Homoeopathic Medical College & Hospital. The candidates can find the fee for both the colleges which is separately given below.

Candidates are required to pay Rs 70,500 in total towards the Annual Charges every year.

The selection of candidates in BAMS and BHMS course of Himachal University will be based on the entrance test. The counselling process for admission will be conducted after the declaration of entrance test result. The answer keys for the same will be displayed on the Notice Board as well as the official website of the University for seven days.

The examination shall consist of one combined paper only, in the subjects of Physics, Chemistry (Including Organic Chemistry) and Biology. The Question Paper will be based on NCERT books of the Academic Session according to which Class 12 examination was conducted by the H.P. Board of School Education.

The Himachal Pradesh University also offers the Stipend/Scholarships and Prizes offered through Rajiv Gandhi Govt. Post Graduate Ayurvedic College. The important information is given below.

The dates given in the below attachment is of last year as the Himachal Pradesh University has not released the latest notification. The dates for the current year will soon be updated on this page as when the notification or the information brochure get released. 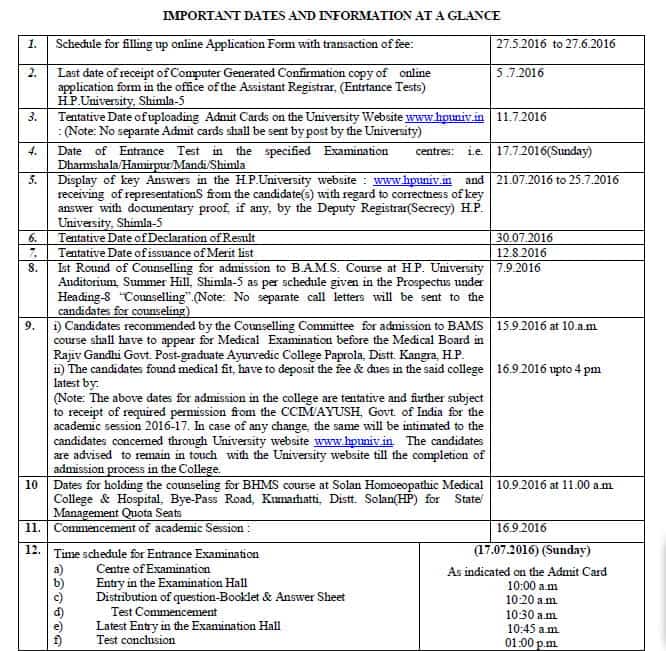