NIFT Admission is based on Entrance Exam which is conducted every year by National Institute of Fashion Technology on All India basis for admission to Undergraduate and Postgraduate Degree Programs in 16 campuses of NIFT all over India. NIFT Application Process has started from 20 October 2017 for admission in Bachelor of Design (B.Des.) and Bachelor of Fashion Technology (B.FTech.), M.Design and M.FTech. The candidates can fill the application form on or before the due date. The last date to apply for NIFT Entrance Exam 2018 was 29 December 2018.

Latest Update: Registration for Situation Test has started on 5 April 2018 from 2.00 pm. Shortlisted candidates can register themselves by following the link given towards the end of the page.

To apply for NIFT 2018 Entrance Exam the candidates are required to fulfill the following eligibility criteria listed below:

Candidates can apply for NIFT 2018 online at the official website or by following the link given below from 20 October 2017 onwards. The candidates are advised to click on the below link to get the complete details on NIFT step by step form filling and submission procedure. The last date to submit the NIFT 2018 Application Form is 29 December 2017. Applicants are advised fill and submit the application form for NIFT 2018 as soon as possible and do not wait for the last time submission in order to get the best exam centre as per their convenience. At one time only one programme can be selected.

Candidates can pay the Application Fee via either of the two modes i.e. Online as well as Offline, The two modes along with their methods are described below.

NIFT Admit Card 2018 is available online from the 9 January 2018 on the official website and on the link which is given below, The NIFT Admit Card will be issued only for those eligible candidates who have submitted their duly filled application forms before the due date along with the requisite application fee.

Admit Card for NIFT 2018 will not be dispatched through the post, so no correspondence in this regard will be entertained. Candidates are advised to check the details like name of the students, exam centre, exam dates, etc. on the printed admit card.

The candidates have to pay the application fee as under:

Approximate Semester wise fees for students selected for admission in NIFT. The applicants will have to pay the required fee(semester wise) for the 4 years of their enrollment in UG course, The listed below fee includes the listed below factors:

NIFT Result 2018 will be announced by the end of May/June 2018 for the exam scheduled to be conducted on 21 January 2018. The students can check their NIFT Result of the entrance examination regarding overall merit-rank obtained by them.

NIFT 2018 will be a Pen and Paper Based Test which will be held in 32 centres throughout India. The details of  NIFT counselling and the complete will be available on the website in the month of April/May 2018.

All the eligible candidates have to appear in the NIFT Exam in their respective test centre. The written entrance exam is designed to test the knowledge, skill and aptitude of the candidates for the program opted.

Result announcement: The result of the entrance examination will be displayed on the NIFT website at the end of May/June 2018.

Selection Process for B. Des Admission

The weightage of each of the tests (CAT/GAT/ST) is as follows: 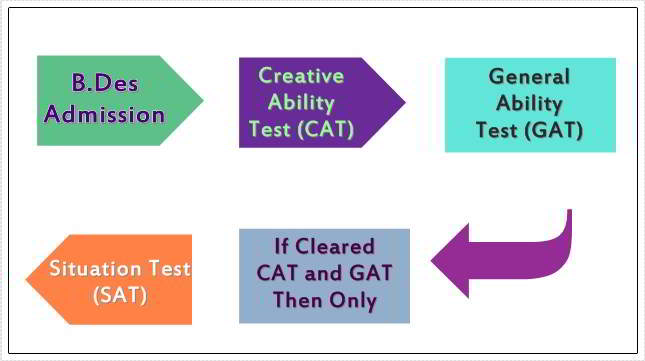 General Instructions for the Qualifying Tests

The applicants who have applied for the admission to the B.FTEch program will have to undergo One test only i.e. General Ability Test (GAT) On the basis of which the merit list will be prepared of the eligible candidates. The shortlisted candidates will be called for the interview and GD (if applicable) schedule of which is given below.

There will no negative marking, and each right answer will be awarded one mark

The weightage assigned to each test in the final merit list of the entrance examination will be as under:

In 1986 NIFT Campus was established under the aegis of Ministry of Textiles, Government of India, (NIFT) is a leading institute in fashion education with the ability to integrate knowledge, academic freedom, critical independence, and creative thinking.