Sainik School Ghorakhal result for written exam will be announced by NTA and will be in form of a merit list. All those students who have qualified for the written exam will become eligible for the medical exam. All the students who qualify for the medical exam will be eligible for the final merit list and will get admission to Sainik School Ghorakhal after the verification of the documents.

The Sainik School Ghorakhal result has been announced. The candidates who obtain qualifying marks and have placed high in the merit list prepared based on the written test will be called for medical examination.

The candidates who pass the medical examination and have a high order in the merit list would be issued joining instructions based on numbers of seats to be filled. Candidates need to know that qualifying the interview/medical examination does not grant any right to admission in Sainik Schools.

All successful candidates have been informed about the result of the entrance exam by post. Moreover, the selection list was also published in leading newspapers and is also be made available on the official website of the school.

Sainik School Society will release the final merit list of Ghorakhal around 28 March 2021. The result of the written examination was declared by the society and the selected students have to appear in the interview and go through the medical test. This is the final merit list released by the Sainik School Society after the interview and medical test of the candidates. The link to check the merit list is given below. 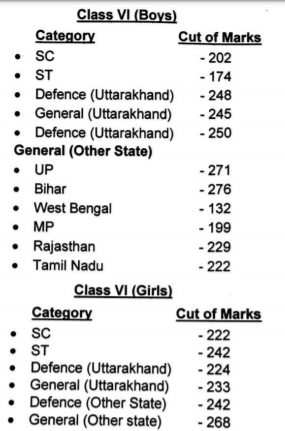 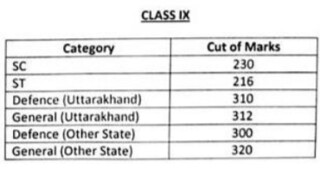 The application fees for the Sainik School Gorakhal is different as per the category. The fee amount for both, General/ Defence and SC/ST are given in the table below.

The total Fees of Sainik School Ghorakhal including boarding, lodging and other charges is approximately Rs.1,31,730 for the year 2020-21. The Fee may be increased as per Sainik Schools Society existing rules.

Sainik School Ghorakhal is granted by the Government of Uttarakhand for the students of Uttarakhand Domicile based on their parent’s Income and Merit. The following scholarships are provided:

Note: The number of seats can be increased/ decreased subject.

The Sainik School Gorkhal entrance exam consists of two papers, i.e. Paper-1 and Paper-2. The exam includes subjects like Mathematics, Language ability, General Knowledge and Intelligence. The duration of Paper-1 will be for two hours, and Paper-2 will be of 50 minutes. The candidates should go through the medical examination where the students will be observed as per the physical standard of authority.

The students should know about the exam pattern for Class 6 and Class 9 before going to appear for the exam. They should know about the type of questions, duration, marking scheme for each question in the entrance exam. The syllabus and questions are changing from time to time. So, the students are suggested to visit and refer the official website of AISSEE to check the syllabus and exam pattern for the academic year.

How to Reach Sainik School Ghorakhal

The Sainik School Gorakhal is located in Bhowali near Nainital, Uttarakhand. The Nainital is 33.3 kilometres away from Kathgodam and 30.7 kilometres away from Haldwani. Kathgodam is enrooted with Nainital and Haldwani. After reaching Kathgodam, one can opt for a local bus or taxi to reach Nainital. The taxis are available on personal as well as the shared basis.  One can choose according to their choice and comfort.

Sainik School was founded in the year 1966 in Nainital, to prepare boys academically, physically and mentally for the admission into National Defence Academy, Khadakwasla, Pune. The Sainik Schools are a system of schools of India established by the Sainik Schools Society. It is one of the 33 Sainik Schools in India.

In case of any query regarding the Sainik School Gorakhal Admission 2021, you can write to us in the comment section below.