NEET Toppers 2018 - The Central Board of Secondary Education has released NEET result on 4 June 2018. This year, Kalpana Kumari from Bihar has secured the top position i.e. AIR 1 with 691 marks out of 720 marks. She obtained 99.99 percentile with full marks in Biology i.e. 360 out of 360. The AIR 2 and 3 positions are occupied by Rohan Purohit from Telangana and Himanshu Sharma from Delhi. The complete list of NEET toppers 2018 along with their marks and percentile scores are provided below. This year, 12,69,922 medical aspirants appeared for NEET 2018. 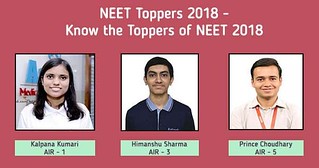 After the announcement of NEET Result, CBSE has released the result statistics. Check the table below to know the percentile score, marks secured and All India Rank (AIR) of the top-50 students.