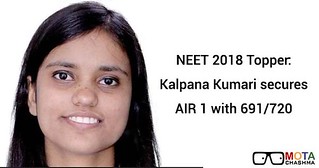 In conversation with Kalpana Kumari, she shared that she never expected to be the topper of NEET 2018. However, she was confident to be in the 10 NEET toppers. But this was a surprise for her as well.

When asked about academic background and class 12 preparations, NEET 2018 AIR 1 said that she used to manage her class 12 studies and NEET preparations separately. She had a timetable, which she preferred to maintain her performance. Her class 12 result is still awaited but confident that she will secure good marks. She had Physics, Chemistry, Biology, Hindi and English as her subjects in the qualifying examination.

Kalpana shifted to Delhi at her maternal aunt’s house for the coaching from Aakash Institute. While asked about her strategy for studies, she shared that, she took the coaching from Aakash Institute. One thing she has learnt is that hard work always pays. She strongly believes that an intelligent person may fail in life, but a hard worker can never fail. One should perform with 100 percent preparations, so that; candidate should have an excuse for saying that he/she gave her 50 percent effort or could have studied more.

She then continued saying that, it was her hard work. She referred many side books for the preparation. The package of Aakash Institute helped her a lot in being the NEET 2018 topper. Beyond this, she used to study for 16-17 hours in a day.

About her marks in NEET 2018 i.e. 691 out of 720, she said that one or two questions from Chemistry were critical, in which she was confused with two options. She also challenged those questions in NEET 2018 answer key and OMR sheet. Then, she admitted that she made a silly mistake in Physics and left the other question. And in Biology she secured 360 out of 360 as mentioned earlier.

Talking about her plans, the Bihar girl said that she would like to get admission in AIIMS, but if not then she will get admission in any of the medical colleges. Then, she will be focusing on 5 years of medical graduation to be a good doctor for citizens of India.

With an attitude to serve others, Kumari said that she always wanted to be a doctor, since her childhood. She can never see people with health issues. She said that it is usually said that the country is lacking in generating good doctors. Thus, being a doctor and helping others makes her a better human.