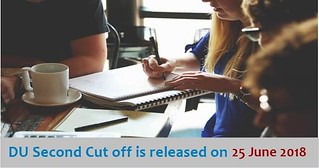 DU Second Cut Off 2018 list is now published by Delhi University. The candidates who could not meet the first cut off can try to get admission on the basis of second DU cut off. DU second cut of is available from 25 June 2018 for which the verification of documents will be done till 27 June 2018. As the university has notified that the initial DU cut off list 2018 will be high, it was expected that the DU second cut off will also be high but the drop in the cut off has been noticed. The cut off marks for the Arts & Commerce and Science is given in the table below.

What are the factors which affect DU Second Cut off?

The cut off is released for the admission in different courses in affiliated colleges of DU. There are some factors on which the DU cut off is prepared. Hence, the candidates should keep the following factors in mind which is considered while preparing DU second cut off.

In case of any query regarding DU Second Cut Off 2018, you can write to us in the comment section below.