Eleven-year-old Mumbai boy "Aahaan Harish Phadnis" won UNESCO Youth Multimedia Contest 2017 which was the video contest held at the global level where the candidates were supposed to create a multimedia production/ Video in order to spread awareness and encourage participation of youth in achieving sustainable development. The UNESCO Youth Multimedia Contest is organised every year and with over 600 entries were done this year and each and every project has been properly evaluated by the international panel of judges of UNESCO. All participants will receive a thank-you letter from Mr Guy Djoken, President of UNESCO Center for Peace.

What is UNESCO Youth Multimedia Contest?

Now the UNESCO Youth Multimedia Contest Result for the year 2017 has been announced and the Mumbai boy named “Aahaan Harish Phadnis” has made India proud by winning the first prize in the contest. There are total 5 Indians who have won the contest in which Aahaan Phadnis came up as the winner among over 6,000 participants.  The list of the winner of the UNESCO from India is given in the table below.

What was the Idea of "UNESCO Youth Contest Winner"?

ALT stands for Alter the way given to Refugees

"Aahaan Harish Phadnis" -  How he Made It to the top!

We the team Motachashma has a Question/ Answer round with the winner of the contest to know more about his strategies and future plans. He shared his creative idea for the "Refugee Crisis in the World." Scroll down to know his views and ideas for creating this world a better place to live. 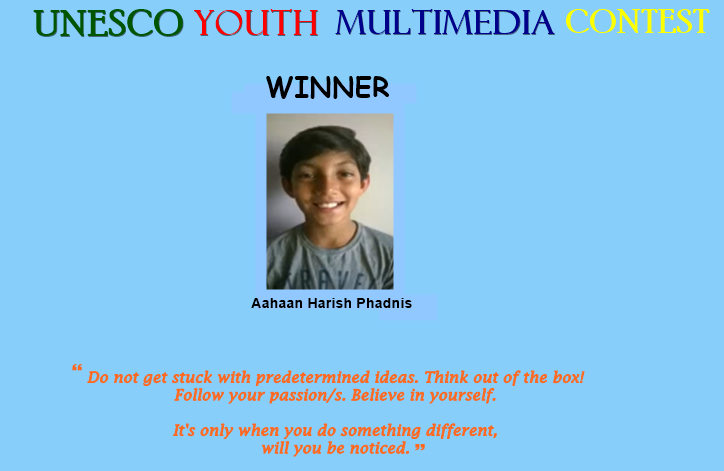 " In the process of researching for UN to delve deeper into a Civics concept that my mother and I were studying, I chanced upon Mota Chashma. I had seen the UNESCO competition on their site, but it was perfectly explained on Mota Chashma and that's how I got interested. I participate a lot in all types of competitions. And now due to Mota Chashma, I get to know all the competitions in one place."

" I draw my inspiration from people who go against the flow. People who make a difference, who want to make this world a better place. Nelson Mandela, Baba Amte, Martin Luther King Jr. and many others who opted for an alternate path when they could have lived a cushier life. They wanted to change the world and I thought if we could reboot the world just as easily as we reboot our computer, we would be paying an honourable tribute to such great lives."

" I wrote down all my ideas and then tried implementing them in various presentation software. The process was a lot of trial and error and took over a week to finalise. I did take feedback from my mother at every interval."

" I am a homeschooler and I learn through self-guided methods. I learn what interests me and research subjects in varied ways. I want to bring about a change in the world, contribute to the betterment of the society and would want to follow a path that will lead to that goal. Nobody has said that you have to do just one thing in this world. You can play multiple roles."

" Go for it! Make India proud. We are a country filled with talent and waiting to be discovered. This is the way we can show the world how unique and powerful we are."