IIT Bombay in Top 10 BRICS Universities has got the 9th position, IISc grabbed 10th position. IIT Bombay has upgraded four notches from last year in the 2018 edition of the QS (Quacquarelli Symonds) World University Ranking for BRICS. India has been a part of the QS ranking for quite a while now, but this time there are two Universities in the top 10 list. IIT (Indian Institute of Technology) Bombay got the 9th position and Indian Institute of Science (IISc) Bangalore has got the 10th position, losing four notches from its last year’s 6th position.

IIT Bombay is amongst the top ten list of BRICS universities ranking. There are five more Indian Universities among the top 25 list, IISc, Indian Institutes of Technology in Delhi, Madras, Kharagpur, and Kanpur. However, the top 25 ranks are dominated by Chinese universities, including the first four ranks. China’s Tsinghua University tops the list, followed by Peking University, Fudan University and University of Science and Technology of China.

The top 10 Indian Universities that secured their position in this list were felicitated by V S Chauhan, chairman, University Grants Commission. On the relevance of ranking, he said, " The role of the rankings, in helping students get to know about the institutions they choose, can't be negated. But sometimes they are overplayed". He also said that "we will celebrate that day when of 350 Universities in the BRICS rankings, 150 will be Indian Institutions" 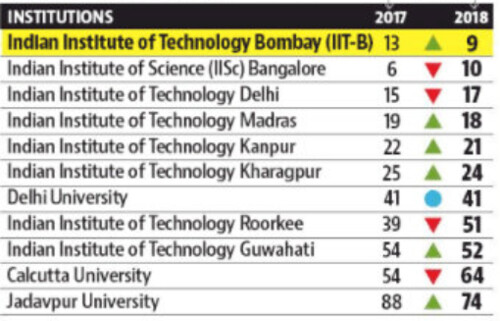 Ben Sowter, the Research Director at QS said “Indian Universities if they wish to compete with the dominant Chinese system need to implement frameworks that encourage the production of high impact research. Creating extensive International research networks allows collaboration, and ensures that research receives a wider reach. Doing so will assist India’s best Universities as they attempt to become more globally competitive”.

There were eight metrics used to evaluate Universities for the QS World Universities Rankings across BRICS countries. The marks were awarded as follows: 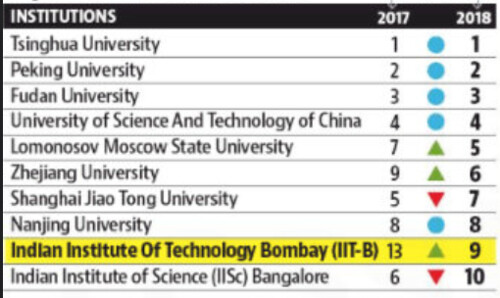 Once again Chinese Universities maintained their leading positions in the latest edition of the QS World Universities. In the top 5 places, four are occupied by China. In the total, 65 Indian Universities have secured their positions. This is more than Brazil (61) and South Africa (12), but less than Russia (68) and China (94).

In case of any query related to this news, write to us in the comments section below.