The jobs and careers of thousands of students are at risk as the Supreme Court declared that the engineering degree secured since 2001 through correspondence would be counted invalid. This determination of Supreme Court has stressed all those who have their degree through distance learning. It is to be noted that the organisations such as UGC and AICTE never approved distance learning engineering programme. Hence, they never offered such course. The approval granted by the Distance Education Council (DEC) was illegal.

However, to their relief, the bench also said that "AICTE shall devise the modalities to conduct an appropriate test. Students (from 2001-05 batches) be given not more than two chances to clear the test and if they do not successfully clear the test within the stipulated time, their degrees shall stand cancelled." 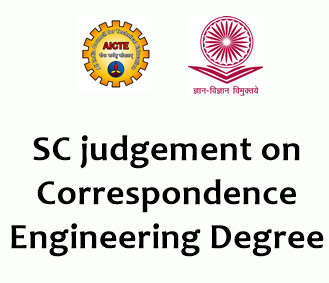