DU to announce 2018 Admission Guidelines by January End that will be finalized by the admission committee of Delhi University, which will be formed soon. There is a possibility that the vice-chancellor of the university may brief the media before the preparation of admission guidelines. The media briefing would be done for the first time after the tenure of last Vice-Chancellor. It is supposed that there would be many changes in the forthcoming admission season. This page has complete details about the DU to announce admission guidelines. 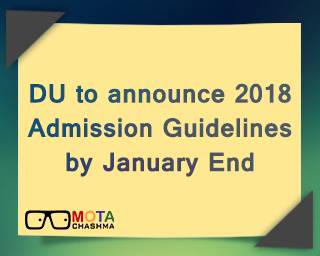 What Vice Chancellor of DU has to say?

Yogesh Tyagi, Vice-chancellor of Delhi University, said that he will announce the DU Admission Guidelines for the 2018-19 session through the media. He further added that they will announce the admission committee of DU soon which will be led by Professor Maharaja Pandit. The admission committee will also comprise the majority of former members. However, the committee expected to be expanded in future and the details about it will be revealed at the briefing for media, said Yogesh Tyagi.

The university will remove mistakes from the last year’s admission process as well as will try to conduct admissions on time for the forthcoming year. The process of online entrance examination that will be conducted for admission in Delhi University will also be redesigned.

Changes in the DU Admission 2018

In case of any query related to DU Admission Guidelines, you can write to us in the comment section below: