CBSE School Safety Guidelines for all the CBSE schools across the country on 12 September 2017. After the murder of the 7-year-old innocent boy Pradhyuman of Ryan International School in Gurugram, the Central Board of Secondary Education which is also known as CBSE released an expansive guideline in regard the safety of the children in the schools. The bizarre and heart rendering incident made the parents worried about the security of the schools. CBSE has said in the guideline that it is a fundamental right of a child to study in a safe environment.

The guidelines released by the CBSE cover not only the health issues in school children but also the deeper aspects of physical, mental and social security of the ward. Safety guideline released by the CBSE mainly focuses on the 5 basic aspects of children’s safety in schools which are physical safety, emotional safety, social safety, emergency preparedness to handle disasters and cybersecurity. Earlier in February 2017, CBSE came with a strict guideline in regard to the safety of the school students but the latest guideline focuses on all the aspects of security. The CBSE has been issuing safety instruction time to time which must be implemented and sensitize the school for ensuring the safety of the school children during school time and while in transit to back home.

The CBSE has suggested some important points for the safety of the school students which should be strictly followed by every CBSE school to ensure the safety of the school children. The following measure is given in the guidelines released by the CBSEGet the security audit done on their premises and personnel from their respective local police station and follow the security-related advice. 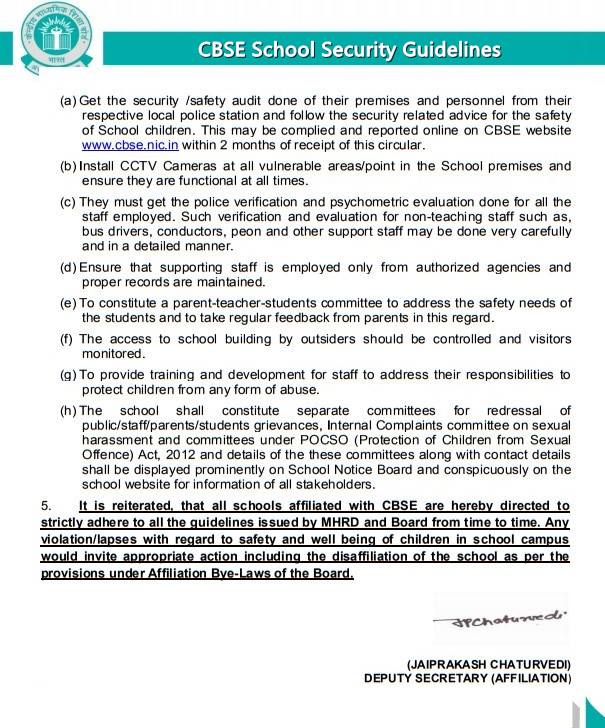 In a case of any query related to this news, you can write us in the comment section given below.