NID MDesign Seats and Cut off 2018 are very helpful for the candidates who have applied for admission in the M.Design course at National Institute of Design. NID MDes (Prelims) Cut Off 2018 has been released. The candidates can get detailed information on total category wise number of seats available at Ahmedabad Campus, Bengaluru Campus and Gandhi Nagar Campus. Cut-offs have been released by the NID Ahmedabad on 6 March 2018. Scroll down to get the NID M. Design Seats and Cut off for the admission session 2017-18.

Latest Updates: NID Design Aptitude Test (Prelims) 2018 Cut Off scores for MDes programme are now released. The cut-offs are given towards the end of this page

National Institute of Design offers 2 and a half year PG course Master of Design (M.Des.) in its campuses in Ahmedabad, Bengaluru and Gandhi Nagar. After the declaration of NID Result for MDesign, Seats available for the admission can be accessed from the table below. Apart from the seats given, the two seats from each of the discipline are reserved for the overseas candidates. The following are the list of detailed seat information about all 3 campuses of NID:

As per the guidelines of the Government of India, the given below are the seat reservation of the candidates (Indian candidates. There are 2 seats in each of the discipline which is reserved for the international candidates and distribution based on caste reservation are given below.

NID Ahmedabad releases the cut off list for the year 2018. This is the cut off for Design Aptitude Test (Prelims). NID M. Design Cut off is actually a score of the last qualified candidate in the merit list open category. The disciplines and the cut off for each category are given below. The points to keep in mind are - 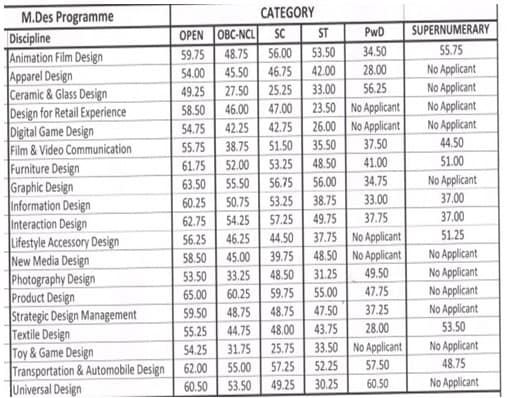 The candidates, who are selected in the cut off list and are offered the seat in the program they have applied for, have to upload scanned copies of their relevant documents for the verification process. Scanned copy of the following documents has to be uploaded on the official website -

NID Ahmedabad releases the cut off list of the candidates who have appeared in the entrance exam this year. This year the cut-off list has been declared on 2 May 2017. The candidates belong to OBC-NCL, SC, ST and PWD categories will be considered as qualified on the basis of a relaxed criterion mentioned below: 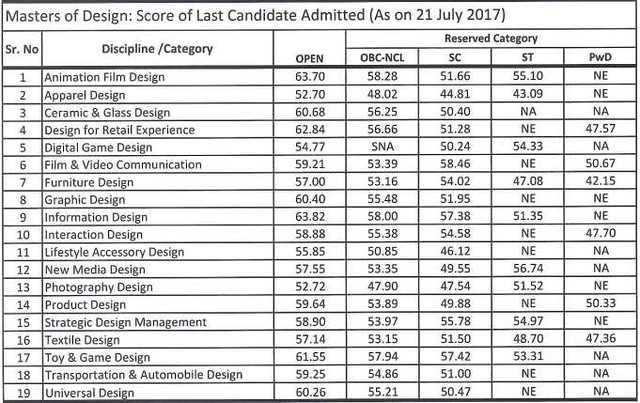 In the case of the tie-break, the deserving candidates will be offered seats on the basis of following rules:

In a case of query related to NID MDesign Seats and Cut offs 2018, you can write us in the comment section below.