WBSCVT ITI 2018 is West Bengal ITI Admission (WB ITI) entrance exam conducted for admission in Government ITIs/ IITCs/ Jr Polytechnics of West Bengal for the academic session commencing from August 2018. West Bengal State Council for Vocational Training (WBSCVT) is a statutory body under the West Bengal state government for administration and examining Vocational courses in West Bengal. The WBSCVT is inviting the applications for the “M” Group Trades and “E” Group Trades. On this page, the eligibility criteria, application process, result and other important details regarding the WBSCVT ITI are described. The applicants are required to scroll down to get the information.

WBSCVT is for admission in different trade courses affiliated to the NCVT under Craftsman Training Scheme (CTS) running in;

Latest Update:  West Bengal ITI Result has been declared on 24 July 2018 for E and M groups. The link to check the same is available on this page. 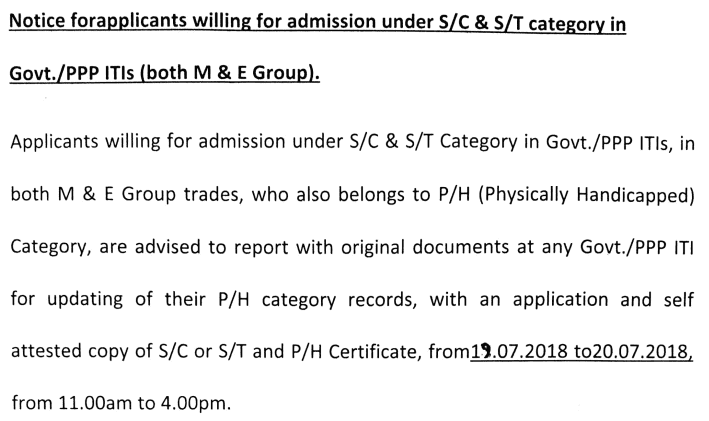 The dates related so WBSCVT ITI 2018 is available below:

Age: The applicants should at least 14 years of age as on 1 August 2018. There is no upper age limit.

The WBSCVT CET Admit Card was available to download from 12 June 2018 for E group through the link given below. The admit card is available online, Candidates have to download it and take the printout of the same. In the Admit card,  the actual date and venue of the entrance examination will be mentioned. The admit card will not be dispatched through the post to the candidates, so no correspondence in this regard will be considered.

The candidates who applied under the M category can make the correction in application form against full marks & marks obtained column, the spelling of Name of the applicant, Father’s name, Mobile no, Date of Birth etc. from 11 to 16 July 2018. The link is available on this page. The candidates can also do this offline as well at the Govt. ITI.

WBSCVT CET application fees are given below. The application fee for the Kanyashree enrollees is different. The payment of the fee should be done by cash deposit at nearby available help desks. The Application fee once paid by the candidates is non-refundable.

The fees given below is for the 1st semester which would be paid by the candidates at the time of admission at the concerned Govt ITI/ ITC/ JP and Govt ITIs running under PPP mode. However, the rest of the fees have to be paid by the student at the beginning of every semester.

The reservation of the seats is also being provided by the West Bengal government. The seats for the different category would be done as per the following norms were given.

However, the 50% of the total seats would be reserved for the District Quota for which the candidates, who passed the entry qualification from the schools located in the district where the concerned Govt. ITI/ITC/JP is located, shall be considered.