Candidates can check the important dates of Sainik School Admission 2020 from the table below. With the help of dates, aspirants can keep track of all the crucial events.

Sainiks School Lucknow Fee Structure is given on this page. The fee structure of the Payment seat would be double the regular fee.

Note: The General Fees for Class 7 & 9 is the same but the self-finance fee process applies to Class 7 only.

Candidates who will qualify in the written examination will be called for interview. Before reporting at the venue for the interview, candidates have to download the interview call letter of Sainik School 2020. Sainik School Lucknow interview will be held at the school campus by a selecting board consisting of the Principal of UP Sainik School, an Army Officer not below the rank of a Major deputed by the local formation headquarters, senior psychologists from the Education Department of the UP state and a team of the school staff.

The fee structure of the Payment seat would be double the regular fee. For those Candidates who have qualified in the Written Exam for Admissions 2020-21, have to download their interview call letters using the link given below.

Sainik School Lucknow Interview for shortlisted students is held in February 2020. The interview will be held from 10 to 14  February and the schedule is given below.

Documents required at the time of Interview

Following are the documents/certificates which must be carried by aspirants at the time of interview:

Candidates who will qualify at the interview are required to appear before the Military medical board after the payment of Rs. 100 for General and OBC categories, while Rs. 50 for SC and ST categories. The fee to be deposited can change as per the command hospital instructions.

The medical exam will be conducted in the Command Hospital, Lucknow. The standard of medical fitness is given in the brochure. The findings of the Military Medical Board are final and binding. No reviewing authority is permissible, and no correspondence on the subject is entertained.

The 1, 2 and 3 rank holders in Sainik School Lucknow exam will be awarded a scholarship of the amount as mentioned below:

Domicile: The father of an aspirant must be a domicile of Uttar Pradesh

Gender: For Class 7, only male aspirants are eligible to apply, while for Class 9 only female candidates will be considered for admission.

Age Limit for Class 7: The male aspirants applying for Sainik School Lucknow admission must be born between 2 July 2007 to 1 January 2010 (both dates inclusive)

Age Limit for Class 9: Only female candidates who will be appearing for Sainik School Lucknow exam must be born between 02 July 2005 to 01 January 2008, with the inclusion of both dates.

Qualification: Candidates who will be applying for Class 7 and Class 9 must have passed Class 6 and 8, respectively by 20 May 2020 from a recognized school.

Likewise last year, applicants can submit an amount of Rs. 1000 (with bank charges) as the application fee through E-Challan or by I-collect (SBI). Candidates must remember to take a transaction ID.

Following are the documents which must be submitted by aspirants during admission only:

Sainik School Lucknow Result 2020 of the written examination will be declared by the UP Sainik School. The roll number of the candidates who have passed the examination conducted on 12 January 2020 will be released in the following given format. The dates on which the interview will be conducted for such candidates is also available on this page. The interview dates will be released along with the written test result. 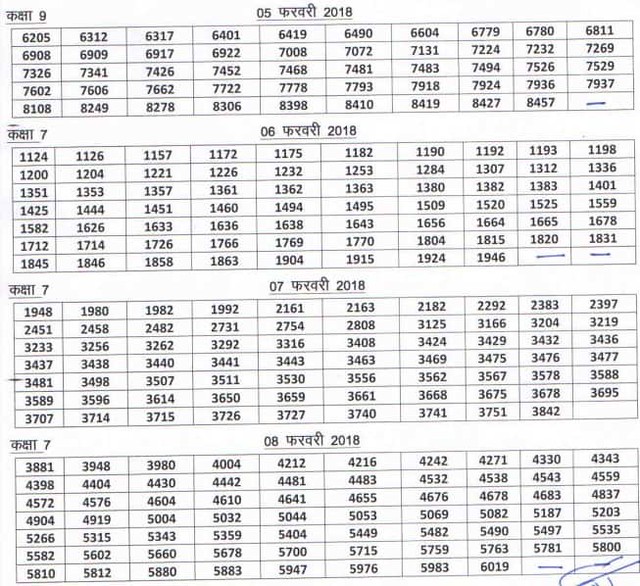 The main objective of Sainik School Lucknow is to provide highly subsidized quality education to selected students with the help of military officers and to make it functional as a nursery and feeder institution for the National Defence Academy (NDA).

For any queries related to Sainik School Lucknow, You can write to us in the comments section below.