CAG (Comptroller and Auditor General) in its latest report on performance audit of Post Matric Scholarship scheme for SC candidates, has noted an issue related to inspection of education institutions, delays in providing fund, the practice of seeking funds by increasing number of SC students. CAG submitted "Performance Audit of Scheme of Post Matric Scholarships to the Students belonging to Scheduled Castes for studies in India in Karnataka, Maharashtra, Punjab, Tamil Nadu and Uttar Pradesh" in the Parliament. As per the submitted report, disbursement of funds had led to delay in payment of scholarship to SC students in the following states

As per the report, there was a delay in disbursement of Post Matric Scholarship fund within 1 to 6 years. PMS fund has not been disbursed to a total of 18.58 lakhs SC students from the states of Maharashtra, Punjab, Tamil Nadu and Uttar Pradesh. According to the report, the Post Matric Scholarship fund worth Rs. 375.30 crore was undisbursed from the state of Uttar Pradesh, Tamil Nadu and Maharashtra.

The report focusing on the disparity in the guidelines stated that there was no provision mentioned to monitor or evaluation was mentioned, which should be mandatory for decision-makers to evaluate the progress of the scheme and identify hindrance for better implementations. 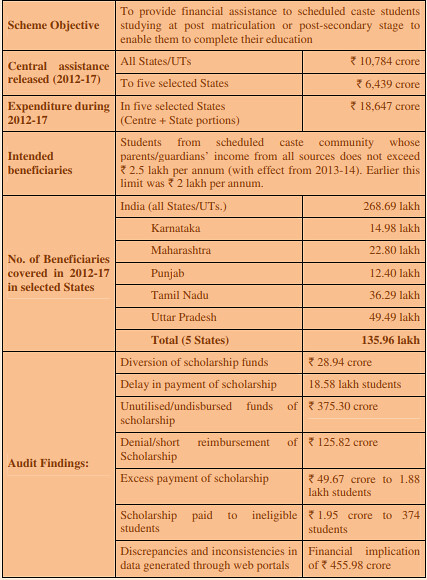 CAG reported that no physical inspection was conducted in five districts namely Ahmednagar, Pune, Kolhapur, Solapur and Amravati in 2012-17. The inadequate inspection ranged between 67 percent and 94 percent was suspected in other four districts including Nagpur (88 percent), Aurangabad (67 percent), Thane (94 percent) and Nashik (90 percent).

There were a short release of fund from Ministry of Social Justice and Empowerment resulting in gathering of arrears amounting to Rs. 5,368 crores viz. 71 percent in connection with these five states. During 2012-17, due to the maintenance of Post Matric e-scholarship portal, poor financial management was imitated in a divergence of funds amounting Rs. 28.94 crores in the state of Maharashtra.