Neel Aryan Gupta has secured AIR 10 in JEE Advanced 2018 with 310 out of 360. He was the second topper from Roorkee Zone after Pranav Goyal who secured AIR 1. His JEE Advanced Rank outperformed his JEE Main Rank which was AIR 182. JEE Advanced is not his only achievement, but he has also secured AIR 21 in KVPY, A perfect 10 CGPA in Class 10 and 93.2% in Class 12. He has also cleared Indian National Chemistry Olympiad (INCO) and the Indian National Astronomy Olympiad (INAO).  He was a student of Allen Career Institute Chandigarh, and he took coaching for four years for IIT JEE. 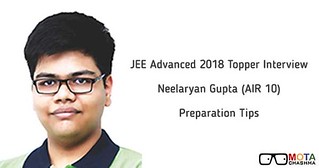 His story is inspiring because his preparation was not easy as he was suffering from some infection during his board exams. This caused a severe pain, and all he could do was to lie down and prepare for his exam. The doctors advised him to undergo surgery immediately, but he had to postpone that because of his exams. He was in severe pain while he took his JEE Main Exam but passed with flying colours and secured AIR 182.

He said, “Last months of preparation are only for practising and not for concept building "

The Low Time after JEE Mains

He appeared on JEE Main 2018 on 8 April 2018 and underwent a surgery on 16 April.  After that, post-operative care and rest took another three weeks. He was tensed at this time, as he was unable to practise any mock tests. At this time his parents played a critical role, they never let him get demotivated or stressed, every day they used to have healthy discussions with him and prepared his mind for the exam. His parents told him that they are with him and will be happy with whatever rank he scores. Though he was unable to practise for the JEE Advanced exam, his mental strength was very high.

He said, “I was not able to study at the most crucial time that is preparing for JEE Advanced.” He also said, “It did not affect me much as that was the time for practising and increasing speed and not learning new concepts. I knew everything, and I only had to practise.”

Gaining the strength back and preparing for JEE Advanced

After his surgery, he took the first practise test on 6 May, in his performance analysis he saw that his silly mistakes were back, but he did not lose heart and started his practice with full vigour. He practised JEE Advanced Previous Years Question Papers from 2007-2017 in the last two weeks of his preparation. He timed himself while taking the test and analysed his performance after the test. He was able to score 90% in most of the previous year question papers, and this helped him in regaining the lost confidence.

“I solved only last year’s papers in the last two weeks, that is it.”

On The day of the exam

JEE Advanced consists of 2 Papers, Paper 1 is of 3 hours, Paper 2 is of 3 hours, and there is a gap of 2 hours in between the two exams. He utilised this time by sleeping in his car as he wanted to be fresh for Paper 2. He said that he was a little tired after Paper 1 and this power nap helped him in increasing his efficiency for the exam.

On the Importance of Studying with his Friends, he said that “We practised the questions papers in a very structured manner and never did that lightly, we used to time the test for full 6 hours, and after the exam got over, we used to compare our scores.”

Know What he has to say about his Achievement!

In an exclusive interview with MotaChashma.com, he talked about his preparation strategy, recommended books for the exam, his role model and the role of his family in his success

Q What was your overall and section wise JEE ADVANCED 2018 score?

Q According to you, how was the difficulty level of the paper? Which was the toughest and easiest section in JEE Advanced 2018?

Q JEE Advanced was computer-based for the first time! What was your take on that?

Ans- Yes, JEE Advanced was computer-based for the first time, and I had no problems with this mode of exam. Instead, I found this mode of exam advantageous as I could change the answer any time unlike in the pen and paper-based mode where once the answer was marked in the OMR sheet it could not be changed.

He also pointed to one disadvantage of the Computer-based test and said: “While looking at the computer screen continuously for 3 hours (in Paper 1) my eyes got tired, and I slept in my car parked outside the test centre to get fresh and energised for Paper 2.”

Q Did you take any coaching? Do you think coaching institute’s help you better preparation for JEE Advanced 2018?

Ans- Yes, I took my coaching from Allen Career Institute, Chandigarh and it helped me a lot in scoring. The entire team of teachers at Allen were quite supportive and even helped him when he was not well with the online assignments.

The study material provided by the institute was beneficial, and the teachers went out of the way to help the students.

Q When did you start preparing for JEE ADVANCED. Please tell us about your preparation strategy and daily routine for JEE Advanced?

Ans –“ I had started my preparations when I was in class 9.  I did not get the first rank in Mock Test conducted by my coaching institute in two years in Class 11 and Class 12. Studying for less number of hours brought a kind of guilt in me that I was not giving enough time for the preparation and studying for more hours was not getting in the desired result. At this point, I would like to state that art of Living classes helped me in staying happy and stress-free.”  He also pointed out that staying happy and stress-free helped him in achieving better scores at the institute level mock tests as he saw an improvement in his score.

My Study plan ( Number of Hours)

Q How extensively did you practice for mock test and sample papers? Do you think participating from the mock test or practise papers help and how?

Ans- I practised all previous year practise paper in last two weeks of my exam. I appeared in all the tests conducted by Allen.

Practising from mock tests help you a lot. As JEE advanced was conducted in the computer-based mode for the first time, the mock test in the online mode helped in getting accustomed to the method of the exam.

He said that mock test help if the students take them with full dedication and seriously.

Q Are there any special books which you think have helped with your preparation? Are school text books adequate for preparing for JEE Advanced?

When should students start practising problems from Irodov, should they wait for the completion of the syllabus to start with this book?

Aspirants can refer to the books mentioned above for the preparation of JEE Advanced. Candidates must practise these books along with their syllabus.

"I would say that for chemistry the candidates could refer NCERT more, but for Maths and Physics, NCERT is not enough for that they need their teachers to know the tricks for solving. He also said the teachers helped in understanding the problems with real-time examples, so that gives a better understanding of the whole concept."

He also said “A student can easily score above 300 in JEE Main without much coaching if the student is dedicated. “

Q Why do you want to study engineering? Which college will you prefer for yourself?

Ans – My cousin brother inspired me. He is a programmer, and I learnt about the programming sector from him. I loved Mathematics, and this knowledge from him attracted to me Computer Science and Programming. I would be joining IIT Bombay.

Q What do you think are the key factors behind your success?

Ans- The key factor behind my success is that “I have analysed and accepted my mistakes, which is very important to score well. And in last two months, I have solved every previous paper of JEE Advanced”. He also listed the preparation strategy for JEE Advanced

Q How did you De-Stress yourself during your preparation? What are your hobbies? How often can you pursue them?

Ans – I used to watch movies, play video games whenever I felt stressed. I have seen almost all movies.  I also think that listening to music has helped me in relaxing. I believe that it is compulsory to keep ourselves stress-free as it helps to focus better.

Q Who is your biggest role model and inspiration for life and why?

Ans – My most significant role model is my Mother Renu Gupta who works as a senior branch manager at Oriental Insurance. She has inspired me to work hard for my goal. I see her daily how she manages to do 9 hours job and after that, she works at home. She is a real hard worker, and I have learned a very important thing from her. That is, “Without hard work, we cannot achieve our goal.”

My mother always told me that, “Always keep your goals high, so even if you do not achieve what you have aimed for, you will get something good."

Q You know! You are an inspiration to thousands of students who will sit for JEE Advanced. What is your message to all future JEE advanced Aspirants?

Ans – I will only say that you should accept and analyse your mistakes then only you would prepare yourself for the best. His advice to all the future aspirants is that they should work consistently to improve their performance. With hard work and dedication, you can achieve your goal

Q What are your Plans for your future?

Ans- My plans for future are not well decided yet, in near future I would be opting for Computer Science at IIT Bombay. I am not much interested in research, and I see myself as a tech entrepreneur in years to come.