About UPU - Established in 1874, the Universal Postal Union (UPU), with its headquarters in the Swiss capital Berne, is the second oldest international organisation worldwide and it has 192 member countries. The Department of Posts conducts The UPU Letter Writing Competition every year. Students up to the age of 15 years are invited to take part in the competition and write a 1000 words letter on the subject given. 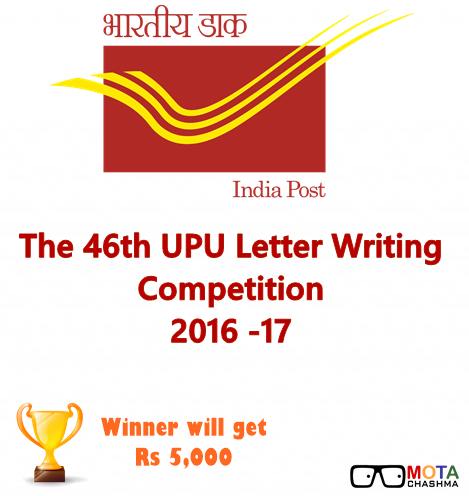 The participants applying for the 46th UPU Letter Writing Competition need to follow the instructions given below.

The candidates have to provide following details on the first page of the entry that would be submitted. The candidates are advised to fill the details mentioned below carefully

Admit Card and Roll No.

Participants are advised to check the details of the application form before the final submission because once the application has been processed then the candidates will not be able to do any changes.

Participating Schools are directed to forward the entries on or before December 21, 2016,to the Chief Postmaster General of their States for evaluation, who will submit the three best entries to the Postal Directorate, New Delhi

The  applications would be received by Chief Postmaster General of their States and they will submit the three best entries to Postal Directorate, New Delhi

At the International Level

The award-winning entries will be selected by The Universal Postal Union.