Two members of the crew of each shortlisted film (national categories) and one member from the non-shortlisted film will be invited to attend the festival. AC II return train fare by the shortest route, lodging and food will be provided. 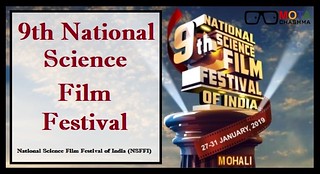 Latest Update: The last date to submit the entries for the 9th National Science Film Festival of India is 31 October 2018.

Candidates can create the documentary, animation, fiction films on one of these following themes.

The participation can be in any of the following categories:

The winners of the Program will be offered the following prizes as per their category of participation. If the award is shared by 2 or more persons/organisations, the amount will be equally divided

The registration for the National Science Film Festival and Competition 2019 is to be done online but the submission of film entries have to be done through offline mode. It is mandatory to send hard copy of the completely filled form with the required enclosures to Vigyan Prasar, Noida by post/ courier/ by hand. Candidates can click on the following link to fill the online application form.

General Specification: The following conditions are to be kept in mind:

There are 2 standards according to which the films in various categories are to be submitted and details are as follow:

The application form of National Science Film Festival and Competition has to be filled & submitted through online mode but the film entries have to be submitted only by post/ by courier/ by hand along with the following enclosures.

All the above-mentioned materials have to be sent to the following address: