PM Scholarship worth Rs. 75,000 Per Month will be announced soon said Human Resource Development (HRD) Minister Prakash Javadekar on September 7 this year. This scholarship will be given to the best 1,000 talented students across the country. According to the minister, the main objective of this scholarship is to stop the brain drain and encourage innovation in the country. There have been various announcements about the scholarship; the cabinet is yet to give the green signal for this scholarship of Rs. 75,000.

This is a much-awaited scholarship in the field of science and engineering, 1000 of researchers are waiting for the final announcement and hoping for the best. Recently Mr Javadekar said that the PM Scholarship is going to start and they already signed the cabinet note. The details about “How to Apply” will be released after the green signal is given by the cabinet for its approval. 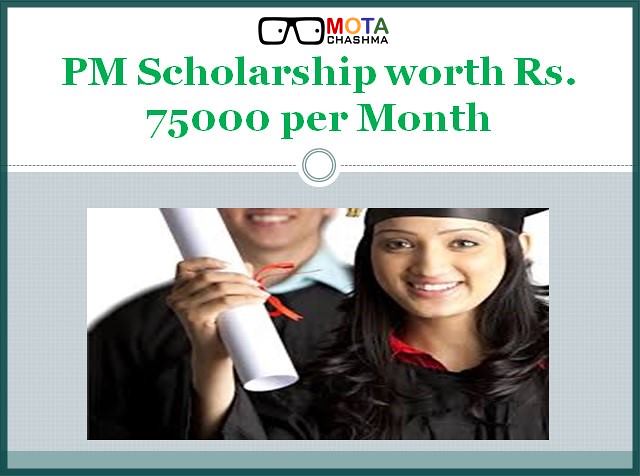 As per the latest Updates, the talented & bright students from the following are proposed to come under this scheme:

Several initiatives have launched by The Central Government such as National Institutional Ranking Framework (NIRF), Impacting Research, Innovation & Technology (IMPRINT), Uchchtar Avishkar Yojna (UAY), Global Initiative of Academic Networks (GIAN) in the field of education for the qualitative development of education in the country.

HRD Ministry announced the Uchchatar Avishkar Yojan during IIT Council Meeting on 6 October 2015 to promote development in the field of manufacturing and design industry as well as motivating innovative mindset in the students and faculty in premier technological institutes. There is also an another goal that is to bring a coordinated action between academic and the industry and to have outcome-based research funding.

The main objective of this scholarship is to stop the brain drain and encourage innovation in the country. This scholarship will further boost up the ‘Make in India’ campaign, the minister hopes. Best brains from India go to foreign countries because they have three problems here said, minister.

Three reasons of the best brains go to foreign countries:

A list published by IIT Bombay on its official website says that the scholarship amount of Rs. 25000 per month is given to the PhD scholars for first two years and after completion of two years of fellowship and on receipt of satisfactory report on successful presentation of Progress Seminar, the fellowships are enhanced to Rs. 28000 per month for remaining years (i.e. 3rd, 4th, & 5th year).

But the government officials said various amounts in various occasions about the scholarship amount to be distributed among the bright minds. Union Higher Education Secretary Kewal Kumar Sharma on 19 August 2017 had announced that the government will provide the amount of Rs. 70,000 per month as a fellowship to the researchers that doing their PhDs in IITs or IISc while addressing students and faculty members during the 67th Foundation Day of IIT Kharagpur.

Last year in the month of August, an IIT official told PTI that, the central government was planning to the grant new scholarship of worth Rs. 60,000 per month for five years to the selected students of IITs to promote innovation.

In case of any query regarding the PM Scholarships, you can write to us in the comment section below.