NIRF Ranking of the colleges for the year 2017 has been released by the Union Minister of Human Resource, Mr Prakash Javadekar. As per the India Rankings, Miranda House (located in Delhi) is the best college in India, followed by Loyola College (located in Chennai). Six colleges of Delhi University are in the top ten ranking. A total of 2,995 institutions has participated in NIRF India Ranking this year in which there were 637 General Degree Colleges.

Union HRD Minister Prakash Javadekar on 3 April released 'India Ranking 2017'. This is India’s second Ranking of the Indian Colleges. The Minister on this occasion also announced that government will maintain more help to provide quality education to the institutions.

The parameters used for the Ranking 2017 are almost similar to those used last year. However, at the level of the details, some of the sub parameters have been modified for a more efficient system of the rankings such as this year, the percentile metric has been replaced by the more discriminating metric.

As per the experts saying, the list of the ranking of the institutes has been prepared to extensive inspection for consistency and correctness by a team of experts. 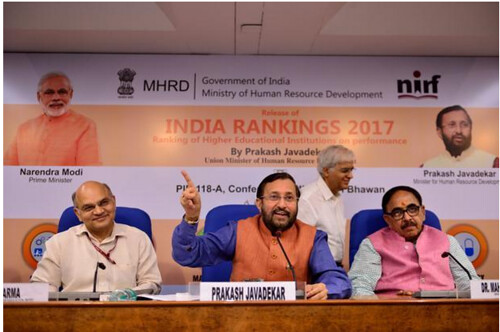 The list of the top 10 colleges of India which is released by the Union Minister of Human Resource, Mr Prakash Javadekar on 3 April 2017 is given in the table below. The readers are suggested to have a look at the table given below. The Miranda House of Delhi holds the number one position in the list of the colleges.

Some of the best Collges of Delhi such as St. Stephens, Hindu etc are missing from 'India Ranking 2017' list  because they did not apply to be considered for the rankings. The colleges that did not apply for National Institutional Ranking Framework (NIRF) Ranking