NEET Counselling 2017: More than 50% Private MBBS Seats are Vacant as the third round of NEET 2017 counselling is completed on 24 August 2017. Deemed and private medical colleges in the country are facing a huge crisis of unfilled undergraduate MBBS and BDS seats under the new system of counselling introduced by the centre this year. Even in Government Medical Colleges, nearly 15% medical seats are vacant now.

This news may come as a hope for the medical aspirants. The main trouble is for private and deemed medical college is the new matrix of the counselling process. Under the new counselling process, these institutes have to go by the DGHS list even after the final transfer of seats and the instituted are not allowed to admit students on their own process.

The 3rd round of NEET counselling is ended and more than 50% MBBS seats and almost 85% of BDS Seats are vacant in private medical and dental instituted in India. The final mop-up round for vacant seats will be conducted on 28 August 2017 and the admission process will end on 31 August 2017. However, unlike deemed universities and private colleges, the government medical colleges will have a chance to fill the seats as the seats will be transferred to the state board. 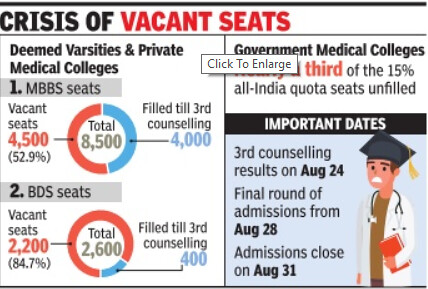 A senior official from the health ministry said that the Directorate General of Health Services (DGHS) which is also a conducting body of counselling will try to resolve the crisis of unfulfilled seats. DGHS will release a list of 100 students for every 10 seats. Till the last academic session, the private and deemed medical institutions had right to select the students as their own but the admissions are being conducted based on NEET UG this year.

An official from DGHS said "The counselling has been undertaken as per the apex court's order and guidelines, and no changes are possible to tackle the issue of unfilled seats. We are going to seek legal opinion and also approach the court again. Otherwise, there is a possibility of up to 12,000 seats remaining unfilled this year."

In a case of any query Related to this news, you can write us in the comment section below.