NEET 2019 may be conducted in Offline Mode

On 7 July 2018, MHRD officially introduced the National Testing Agency (NTA) through a press conference chaired by minister Prakash Javadekar. Entrance exams such as NEET 2019, JEE Main 2019, GPAT, UGC NET 2018 and CMAT 2019 will be held conducted by NTA. As per the press conference, these exams will be conducted in computer based mode and NEET and JEE Main will be held twice a year. However, on 2 August 2018, HRD minister Prakash Javadekar hinted in Parliament that they will rethink on the decision of conducting NEET 2019 in a computer based mode.  Until last year, NEET was conducted by CBSE in paper-based mode for admission to the various medical colleges across the country (except for AIIMS and JIPMER). 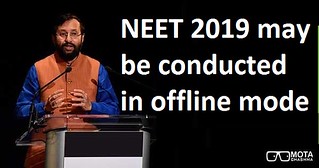 One of the biggest questions regarding NEET 2019, is that will this test be held in online computer based mode or paper based mode. With the latest development in the parliament, the MHRD has announced that they will soon decide on the conducting format of the test. As per the NTA press conference chaired by Minister Prakash Javadekar, and on the official press release, it was clearly stated that the entrance test will be held in computer based mode only. The fate of NEET 2019 is yet to be decided until now. Candidates are advised to visit Mota Chashma regularly, for all the latest updates regarding NEET 2019 to be held in online or offline mode.

Why NEET 2019 may be conducted in offline mode?

The Ministry of Health and Family Welfare (MoHFW) were not happy regarding, the announcement of the decision to conduct NEET 2019 it computer based mode. As per sources, the Health Ministry was not consulted before the NTA press conference was held. Thus, at Parliament on 2 August, Prakash Javadekar, Minister of Human Resource Development (MHRD), hinted that a decision on NEET as computer-based test will soon be announced.

Also, it was announced that for each candidate, the question paper will be different. Thus, it is also expected that both the Medical Council of India (MCI) and Dental Council of India (DCI), who looks after the syllabus of NEET, will express concern. At present, the implementation of the psychometric method, standardization techniques and the best of equated scores for admission are not clear since the conduct of NEET in computer based mode is yet to be decided.

Is NEET 2019 ready to be a Computer-based test?

NEET is a medical entrance test, previously held by CBSE for admission to the various medical colleges across the nation. Until last year, NEET was held in paper-based mode only. A total of 12,69,922 medical aspirants appeared for NEET 2019, and the test was held in 2255 exam centres located at 136 different cities all over India.

With the sudden transition of NEET from a paper-based to a computer based test, it is expected that candidates will face problems while writing the test. As per MHRD, they will provide 3000 NEET practice centres for candidates, so that they become familiar with the test. However, details about these practice centres are yet to be announced.

Note: ICAR 2018 (national level entrance test held for admission to the agricultural colleges across India) was conducted in computer based mode for the first time. But, it was cancelled due to various administrative reasons and a re-test will be conducted18 and 19 August 2018.