NEET 2018 Question Paper Shortage Causes Delay in Exam in Madurai. Reports suggest that by and large, the National Eligibility cum Entrance Test 2018 has been held in a free and fair manner in all the 2,255 examination centres in 150 cities, all over India on 6 May 2018. However, there has been a shocking news coming from an exam centre named Narimedu in Madurai, Tamilnadu, where question paper shortage caused some delay in the exam. A reputed English newspaper reported that more than 100 NEET aspirants could not write their exam at Noyes Matriculation Higher Secondary school as these aspirants were provided with a wrong set of papers.  (Also see: NEET 2018 Exam Conducted Successfully)

Reasons for Delay in NEET Exam at Narimedu Centre

When the exam was over and most of the students had come out of the examination hall and some 100-odd students had not come out; their parents started getting concerned about the safety of their children. Initially, CBSE and the school authorities kept mum about the reason of this. Some of the parents wanted to know if their children were still in the examination hall or had already left. 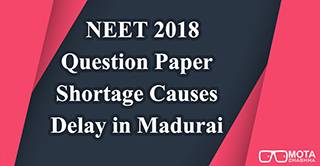 An official told the above-mentioned newspaper that more than 100 candidates were provided question papers in English and Hindi instead of giving them Tamil and English. According to the newspaper, the official said, “These students had opted for Tamil question papers and hence the students could not take up the examination.”

Subsequently, a section of parents was allowed to enter the examination centre by the CBSE officials.

According to the said newspaper, P. Selvaraj, the NEET city Coordinator of Madurai made an assurance that they have taken copies of question papers and distributed them to the students. He further assured that the answer scripts would be evaluated without any issues.

Thereafter, one batch consisting of 22 students whose NEET paper was delayed came out at around 3.30 p.m. These students told that they were provided snacks with juice and lunch which was promised to be provided to them before the exam was provided only once they had come out of the examination hall after taking their test. After completing all the formalities regarding marking their signatures and furnishing personal details in a statement in English, the students were given full three hours’ time to take their exam.  Finally, a batch comprising 90 students started to write their NEET exam at 3 p.m.