This new policy may attract meritorious students to practice in traditional methods of AYUSH applications. However, several students have expressed their displeasure over the sudden announcement.

NEET 2018 must for BHMS/BAMS Admissions in Odisha

Hari Ballav Mishra, Additional Secretary said in his letter to OJEE chief, "This notification has been made under the direction of Union Ministry of AYUSH, which portray that NEET is compulsory to get admission into AYUSH undergraduate courses from the 2018-19 academic year." 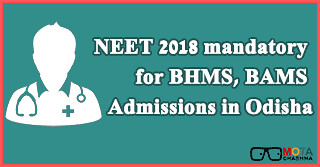 The OJEE authority earlier published an advertisement for admission and according to that application process for OJEE has been started from 31 January 2018.

NEET 2018 will be mandatory to study Medicine Abroad