NATA 2018 Result has been declared on 4 June

NATA 2018 Result has been declared on 4 June by the Council of Architecture (COA). The result of NATA has been declared in online mode. Candidates who have appeared in the written test conducted on 29 April 2018 can check their result now. Candidates need to enter their application number, password and security pin to check their result of NATA. The result for National Aptitude Test in Architecture (NATA) is declared in the form of scorecard which is available in e-format. The answer key/ response sheet for NATA has already been declared by NATA officials on 17 May 2018. The official marking scheme has been followed while preparing the NATA Result. The result of NATA contains the following information:

Latest Update - NATA 2018 Result has been declared. The candidates can check the result by following the link here. 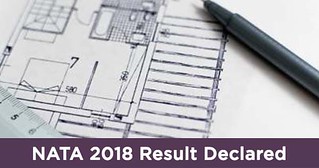 Marking Scheme Followed for NATA Result: There is no negative marking in the exam. The exam was conducted in English in two parts. There were 90 minutes for each part. Part A was an online test, whereas the part B of the exam was paper-based Drawing Test.

The minimum qualifying marks for NATA Result 2018 is based on the following rules:

National Aptitude Test in Architecture and is a National Level Architecture exam conducted by Council of Architecture (COA) to select the students for five years B. Arch Course in various colleges across India. NATA is more like an eligibility test for admission into the Architecture Course.

In case of any query related to this news, you can write to us in the comments section below.