JIPMER 2018 Changes Announcement-  Jawaharlal Institute of Postgraduate Medical Education & Research has released MBBS brochure for 2018 admissions and invited JIPMER MBBS applications from 7 March 2018. Along with the release of the brochure, JIPMER brought many changes this year. Be it the probability of conducting the exam in single shift or increase in the number of exam centres, there are many such changes have been introduced this year. Well, it is totally up to the students whether they find such alteration beneficial or not. Here on this page, we are covering major changes which have been embraced by JIPMER this year.

Get More Details on JIPMER 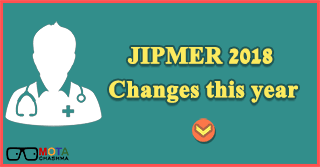 JIPMER is the abbreviation of Jawaharlal Institute of Postgraduate Medical Education & Research. The institute conducts an entrance exam for the admission into MBBS programme. The brochure has been released by the institute and there are some changes can be seen this year in comparison to last year. The changes which have been carrying out from this year is given below.

There will be Negative Marking

Exam may be conducted in Single Shift

Earlier, the JIPMER Exam was conducted in two shifts i.e. Morning and Afternoon. However, this year, the institute is planning to hold the exam in the single shift for all the students. Although that will totally depend on the number of applicants, logistics and the final directions of the Madras High Court.

Size Dimensions of Photo and Signature have been altered

The size dimensions of the photo and signature files required for upload have been slightly modified this year. Now the minimum size of the uploaded photograph and signature would be 10 KB instead of 20 KB whereas the maximum size would be 80- KB which earlier was 200 KB.

The number of JIPMER MBBS 2018 Exam Cities has also been increased. Earlier there were total 75 cities where the exam was conducted but from this year, 45 more cities have been added. Hence, this year the JIPMER Exam would be conducted in total 120 cities. The candidates can make the choice of three exam cities while filling up the application form.

Other Changes in JIPMER 2018 Admission Process

This year, the horizontal reservation for differently abled candidates has been increased to 5% from 3% in keeping with the Rights of Persons with Disability Act, 2016.

In case of any query regarding JIPMER 2018 Changes, you can write to us in the comment section below.