ITIs to get separate boards, Know the changes it will bring

ITIs to get separate boards as the government may approve the establishment of ITI board soon. A big move in favour of students who are pursuing various courses under ITI. As per sources, every year, as many as 23 lakhs students pass out from ITI across the country. The purpose of setting up a board for ITIs is to strengthen them like CBSE and ICSE board have. As after the establishment of ITI board, the candidates will get the certificate which enables them for admission into other school and colleges in regular courses. The ITI passed out candidates will be considered as similar as pass out from CBSE and ICSE board. Read out the complete news on this page.

Earlier, on the completion of ITI, the candidates receive National Trade Certificates. However, with the foundation of ITI Board, the candidates will receive the certificate with the equal value as provided by CBSE and ICSE boards. The board will be responsible to provide assessment and certification to ITIs’ candidates.

Ministry of Skill Development and Entrepreneurship initiated the idea of setting up a board for ITI which was further approved by HRD minister, however, the final decision regarding the approval and funding will be announced soon by the officials. 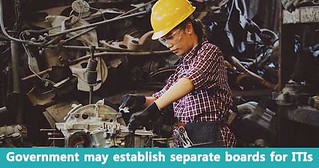 Highlights of the News!