On Saturday, 7 July 2018, Shri Ashwani Lohani delivered a lecture at IIM Ahmedabad, at an event organised by The Red Brick Summit 2018 Speaker Series along with Rail Transport Planning and Management Course. The lecture was a success with around 100 people in attendance. 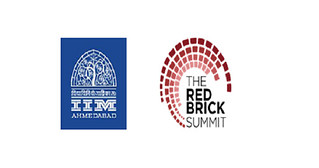 Shri Ashwani Lohani is an Indian Railway Service of Mechanical Engineer (IRSME) officer, currently serving as Chairman of the Indian Railways Board since August 2017. He has also served as the Chairman and Managing Director of Air India Limited and as the Managing Director & Commissioner Tourism, Government of Madhya Pradesh. Besides, he has been the Director of National Rail Museum and Director in the Ministry of Tourism Government of India.

For students, the talk was an interesting peek into Shri Lohani’s lifelong experiences. He gave succinct examples from his time handling tourism in Madhya Pradesh and Air India to highlight the importance of the “human” resource of any organisation. He spoke in detail about the process reform being undertaken by the Indian Railways, in changing the ways that decisions are taken and contracts are entered, enabling faster action. Highlighting the need for a will to change within an organisation, he mentioned that while every other activity could be outsourced, will not be. Among other things, he also talked about the modernisation initiatives being undertaken by the Indian Railways and explained the challenges being faced by the organisation.

Referring to the talk, second-year PGP student Priya Kumari said, “The talk was highly insightful in terms of elaborating on the developmental challenges associated with legacy organisations. While the spirit of risk-taking and accountability of employees has to be ensured by the top-down mandate, the system should facilitate operations at the ground level. For example, the corruption conference organised by Sir provided a platform for employees to discuss and recognise corruption issues in order to find the right solution.”

Established in 1961, the Indian Institute of Management, Ahmedabad (IIMA) is recognized globally for excellence in management education. One of the top management schools in the world, IIMA educates leaders of the enterprises.

The Institute’s strategic priorities include: strengthening the connection with its various constituencies, including academics, practitioners, alumni, and the community; nurturing a high-performance work environment of a stretch, autonomy, and teamwork; and strategic growth while maintaining an emphasis on quality.

IIMA has been ranked as #1 Management Institute as per the National Institutional Ranking Framework (NIRF) rankings of Ministry of Human Resource Development, Government of India.