DU Third Cut Off 2017 may see lower marks, Nearly 50% seats filled so far. At the end of admission under the second cut off half of the seats are filled in popular Delhi University colleges such as Lady Shri Ram, Miranda House, Kirori Mal College, Daulat Ram College, and Ramjas College. Around 28,000 seats are still left in DU colleges and will be allotted in  DU  third cut off 2017. As per the latest reports from various DU Colleges, there will be a dip of up to 2 percent in most courses.

DU Third Cut Off 2017 May See Lower Marks - Highlights of the News!!

According to University Officials, they have approved admissions for 28,222 seats across colleges and the campus colleges have filled most of their seats. They also said that the fee payment process was still on and 23,317 applicants completed the process. Applicants can submit their fee by Wednesday noon. Admission of those candidates will be cancelled, who are not able to pay the fee amount. 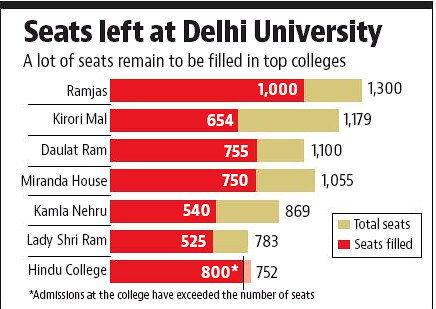 Seats left in DU Colleges for DU Third Cut Off 2017