DU Admission for Foreign Students will start in February 2017

DU admission for foreign students will start in February 2017. Delhi University is going to start the admission process for the foreign students to pursue undergraduate as well graduate programmes in Delhi University. The DU admission process will start from the first week of February 2017. According to the news, the admission process will be completely online, and the candidates willing to pursue the undergraduate as well as post-graduate programmes need to fill the application form online and have to make the payment for the same through online mode. However, the documents of all the candidates will be verified by the consulates.

Get details on DU Admission

Amrit Kaur Basra, deputy dean, Foreign Student's Registry, said: "The admission process will start from the first week of February with the commencement of the application process. We will issue a notification shortly."

According to FSRO head Amrit Kaur Basra, The maximum number of foreign candidates who take admission in DU are from South Asian and South-East Asian nations, there are very few students that come from the Middle Eastern, European and African countries. As per the date available with DU’s Foreign Student Registration Office (FSRO), the number of Foreign candidates taking admission in Delhi University has increased in the last few years. 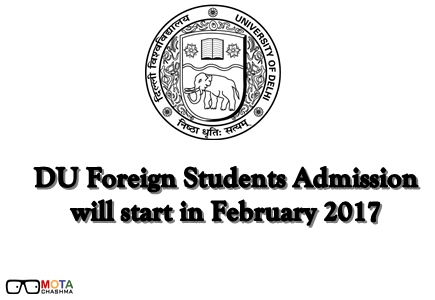 Foreign Candidates are ones who;