Corporates can now set up medical colleges in India : MCI

"For-Profit" Companies in India can now set up their own medical colleges  in India - A decision recommended by NITI Aayog and implemented by Medical council of India.

If private colleges were found to be grossly lacking and involved in fraud, NITI Aayog is going to hand over all medical education to them and calling for the reform.

In our country, educational institutes are run by the government or registered "not for profit" societies or charitable trusts. The foreign companies are prohibited from investing in these societies or trusts under the rules of Foreign direct Investment. The group of doctors in general body has shown their support to the news allowing the corporates to start medical colleges in India. The majority of doctors said, “The decision will improve the education standards to the level of Harvard and Oxford universities.” 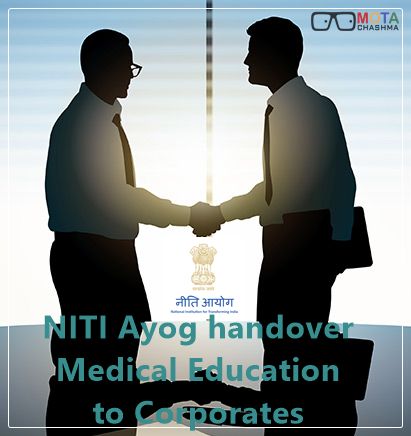 What members of Medical Council of India (MCI) has to say?

Coimbatore-based laparoscopic surgeon L P Thanagaveluan, an MCI member who was present at the meeting, praised the decision of Medical Council of India and said “Many private institutions are anyway making profit through non-transparent and illegal means. If we legalise corporates they would charge a very high fee, but they will be forced to pay income tax."

There were many recommendations from the members on how this could be done, but a majority thought it was a good idea. Some of them recommended that a portion of the seats in these institutions should go to students from economically weaker sections or to merit students entering private colleges through the state quota.” He added.

The members who were present at the meeting suggested that some proportion of seats in corporate institutions must be reserved for the students who belong to economically and financially weaker sections. It is a good suggestion though but the implementation of the idea totally depends upon the NITI Ayog and Medical Council of India whether they will implement this plan or not.

President of Muslim Educational Society, PA Fazal Gafoor said “It is not possible for us to have two system of ownership. We already have trusts and societies running "non-profit" colleges and they were not paying the income tax.”

This decision of the Medical Council of India (MCI) to hand over the medical education of India to the corporates has affected many private institutions who were making money through illegal means without paying taxes and making donation based admissions. As this is a fresh idea from MCI, so every people have different opinions on the decision. But the majority thinks that it is a good idea to legalise the medical education in India.