Lack of Internet Connectivity in the North East Region is not only dividing the north-east region from the mainstream but also is becoming an obstacle for the Central Government  to implement scholarship scheme in North East India.

Najma Heptullah, union minority affairs minister, in a written letter to the IT minister Ravi Shankar Prasad, has expressed discontentment over the inability of students from North East India to apply for scholarship programmes due to lack of internet connectivity. In her letter she also suggested that a good  internet connectivity can be very helpful in implementing the minority scheme in the North Eastern Region of the country.

North Eastern region has a high number people belonging to minority community and thus the scholarship scheme for Minorities can be very helpful for the region. 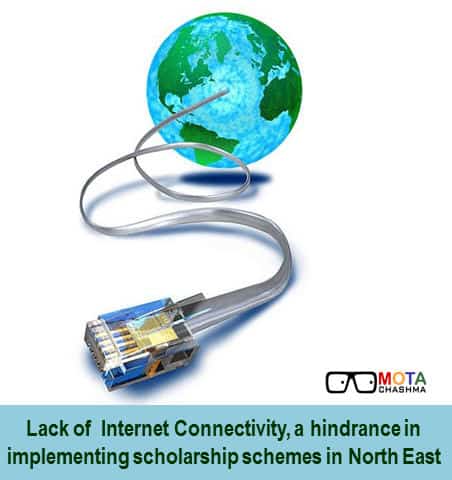 The list given above highlights three important Minority Scholarship Schemes in the country, and the mode of application for 2 out of 3 scholarships is only online. If the Internet connectivity is improved in the region then it will surely help the student community.

The following table gives information on the amount of scholarship demands made by North Eastern states in 2014 on pre-matriculation, post matriculation and merit-cum-scholarships basis.

Scholarship demands in NER for 2014:

While Assam was the only exception to this list, Meghalaya and Arunachal Pradesh made no demand during the period.

Given the physical distance with the region, the Ministry uses Videoconferencing facility to which is again dependent on Internet Connectivity for connecting with the state Governments for the information on the progress, or to address the problems faced by the region regarding its various schemes. Due to poor internet connectivity the ministry also suffers on the monitoring ground.

She suggested that well-placed and strong internet coverage in the region can work towards solving the problems of the students living in those areas.

One More Scholarship Scheme in Dilemma

The last date to apply for the scholarship is February 10, 2015.
Read more about Ishan Uday Scholarship