The CBSE Result 2017 was scheduled to be released on 24 May but now there is no clarity on the exact date of the result. The cause of the delay is because the Delhi High Court has asked Central Board of Secondary Education (CBSE) to continue with the moderation or Grace Marks Policy this year. The result will now be declared in last week of May.

CBSE has not announced the exact date of CBSE Results 2017 for Class 12 but there was a speculation that the result would be declared on May 24 for the CBSE 12th Exam 2017.

May 25: CBSE may not go to SC against Delhi HC's order asking it not to do away with moderation of marks. Most likely

May 24: High Court has given orders to CBSE that it should go as per the old evaluation system. The students feel relieved but it will cause a delay in the CBSE 12th Result 2017.The Result is now expected to release next week: (Check: CBSE Result 2017 Updates)

The delay in the result would be because the result has to be re-tabulated after the court order.

May 23: The court has termed CBSE's decision to scrap its 'moderation policy as "unfair and irresponsible"

May 17: CBSE asks Delhi University to give extra weightage to students from CBSE due to the change in marking policy. Most likely CBSE will stick to its five-point moderation policy.

May Mid: PIL File by advocates Rimali Batra and Ashish Verma. The PIL stated that Kerala, Tamil Nadu, Andhra Pradesh and Chhattisgarh, have decided to implement the policy change from next year and hence the students from these states would be at an advantage over students from Delhi and other states.

May 10: Decision Circulated to all Boards in India

April 24: Meeting for change in policy took place after the majority of the Class 12 exams had got over and the evaluation of some subjects had already started.

CBSE has opted for moderation policy to due to the difference in the difficulty level of a various set of question papers, to compensate the candidates for difficulties experienced in answering questions. It is done to maintain parity of pass percentage through the years. 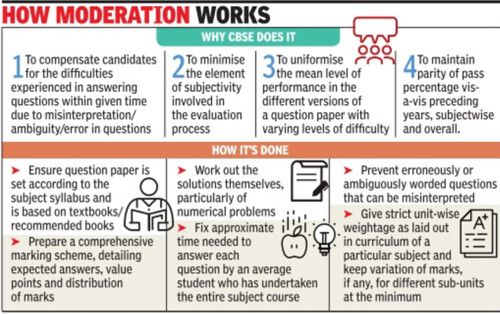 The Board examinations for Classes 10 and 12 were held from March 9.

Students can give their viewpoints and reaction in the comments section below.